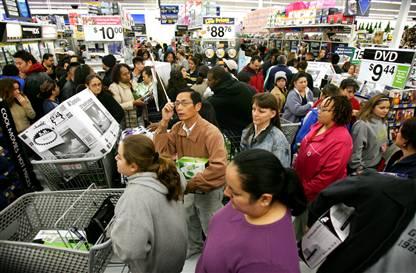 It's not like this type of activity doesn't happen every day-after-Thanksgiving here in the US of A, but 2007 is being seen as a banner year for "aggressive pricing" come Black Friday. As expected, competition will likely be most heated in the 40- to 42-inch range, where plasma and LCD manufacturers will both be vying for business from eager consumers. Furthermore, RPTVs and 720p sets in general are expected to sport rock-bottom pricetags as they attempt to compete with the fresher, more attractive 1080p flat-panels. As for pricing, analysts expect the lowest stickers to be found on Olevia, Westinghouse and Vizio sets, while other "top-tier brands" slash hundreds off in an attempt to still look appealing. Whatever the case, we'd suggest you gear up for madness if you're scouting a new HDTV on Black Friday, but apparently, the savings will make the mayhem worth dealing with.

[Image courtesy of MSNBC]
In this article: 720p1080p, black friday, BlackFriday, deal, deals, hd, lcd, olevia, others, pioneer, plasma, price, price war, prices, PriceWar, pricing, sony, westinghouse
All products recommended by Engadget are selected by our editorial team, independent of our parent company. Some of our stories include affiliate links. If you buy something through one of these links, we may earn an affiliate commission.
Share
Tweet
Share