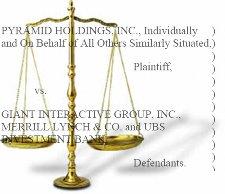 No, I'm not making this up. In October Giant Interactive Group Inc took action against gold farmers in their MMO, Zheng Tu Online (reportedly the most popular online game in China in 2006, with 1.3 million active subscribers). Giant changed the game-mechanics to prejudice against gold farmers, just one month before their IPO in November.

Well, after kicking out all those gold farmers who were paying subscribers, concurrency figures fell, as did total registrations - and the investors are apparently cross with Giant for both not disclosing their action against the gold farmers, and using the registration figures for September (before the rules-change was made) in their IPO registration statement, instead of the October figures.

So, two parts here. Firstly, that the investors feel that Giant has misrepresented registration figures by selecting a more favorable month, prior to their rule-changes.

Secondly, it's obvious that the investors in November's IPO don't give a damn about gold farmers. Gold farmers, to them, represent activity and profits - and that's what investors really want, isn't it? In the end, it's not the company officers who drive the direction of a business. It's the investors and the board.

In this article: giant-interactive, gold, gold-farming, legal, rmt, virtually-blind, zhengtu-online
All products recommended by Engadget are selected by our editorial team, independent of our parent company. Some of our stories include affiliate links. If you buy something through one of these links, we may earn an affiliate commission.
Share
Tweet
Share