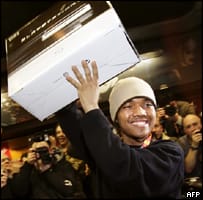 If you weren't already aware, there actually is a bright side to Sony jacking up the price of its PlayStation 3 for European gamers, and while folks were still forced to camp out to snag a (somewhat) coveted unit, things went over drastically better during London's launch compared to similar ones here in the US. While we knew the Brits and Aussies were fully prepared to blow a good chunk of savings on the pricey machine, Americans should seriously scrutinize just how easily these other nations pulled off the high-profile launch, reportedly happening sans any reckless drive-bys or random acts of violence. More interesting, however, is the tidbit where "everyone who purchased a PS3 at the London launch event received a free 46-inch HD television and a taxi home." You read right -- over £250,000 ($490,450) worth of HDTVs were handed carted out to over 100 presumably elated gamers, and London officials made sure that cabs were readily available to rush buyers home after completing their transactions. Notably, a 17-year old fan snagged the pole position in line after waiting just 36 paltry hours, which still suggests that we Americans are more devoted (or delusional, depending on perspective) when it comes to camping out, but we don't even want to imagine the mayhem that would've ensued here if the first hundred buyers were eligible for a free display. Good show, England, good show.

In this article: aussie, australia, britain, cab, crime, england, europe, free hdtv, FreeHdtv, launch, mayhem, playstation 3, Playstation3, police, ps3, safety, sony, taxi, uk
All products recommended by Engadget are selected by our editorial team, independent of our parent company. Some of our stories include affiliate links. If you buy something through one of these links, we may earn an affiliate commission.
Share
Tweet
Share
Save