Dude, you're getting a drink: Dell dude now a waiter 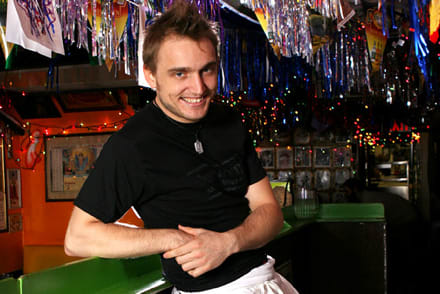 Oh, how the mighty have fallen: Ben Curtis, famous just a few years ago as "Steven the Dell Dude," is now a waiter / bartender at Tortilla Flats in New York. Although the Steven ads were hugely popular and generated tons of buzz (and revenue) for Dell, the company eventually dropped the campaign after Ben got arrested for buying pot in 2003 -- shocking no one who actually watched the commercials, but apparently not the message Dell wanted to send the parents fronting the cash for all those machines. Although he's down to slinging drinks, Ben's taking it in stride, saying "There were times when I made boatloads of money as an actor, but here I can be myself." That doesn't mean he's given up the dream just yet: he's hoping to score big with his band, Whale, which he says has "the green light," but has "decided to take a little time off to record our EP and package ourselves properly." Hm, seems like a perfect opportunity to get back together with Dell, actually -- it could use some new music after getting caught using GarageBand's built-in loops in that XPS One teaser.
In this article: ben curtis, BenCurtis, dell, steven the dell dude, StevenTheDellDude
All products recommended by Engadget are selected by our editorial team, independent of our parent company. Some of our stories include affiliate links. If you buy something through one of these links, we may earn an affiliate commission.