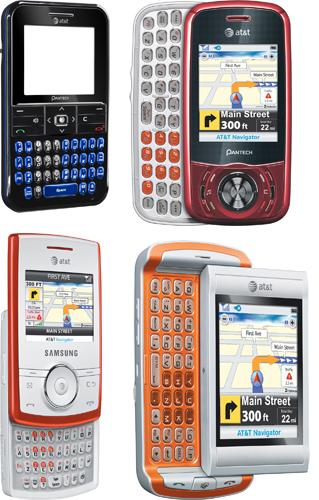 If you're into that whole SMS craze and you're on AT&T, you're in luck -- four times over. The carrier's gone ahead and announced not one, not two, but four QWERTY-equipped dumphones today, including a dual slider and a Pantech being billed as "the world's thinnest device with a full QWERTY keypad."

First up, the Pantech Matrix is available now in your choice of blue or green, with red being added on Thursday, October 16. It slides two ways -- a conventional vertical slide to reveal a numeric keypad, and a second side slider for the full QWERTY action. It's got 3G, AT&T Navigation, Video Share support, and a 1.3-megapixel cam, running $79.99 on contract with rebate. Next, the Samsung Propel apes the i620's industrial design -- but make no mistake, there's no Windows Mobile to be found here. It also does 3G and features the full host of AT&T services, packs a 1.3-megapixel cam, and will run the same $79.99 as the Matrix when it hits in late October in blue, green, red, and white with red accents. Next, the Pantech Slate is pretty appropriately named -- if its claim of being the thinnest QWERTY device in the world ends up holding water, anyway. It'll be available in late October alongside the Propel for $49.99 on contract with a 1.3-megapixel camera, but there's no high-speed data to be found in this sucker. Finally, the long-rumored Quickfire -- you may know it better as the Knick -- will come in November bearing AT&T branding and a Sidekick-esque style that'll likely appeal to the young'uns among us. It's got a touchscreen in addition to a slide-out QWERTY deal, a 1.3-megapixel camera (notice a trend here?), and 3G in your choice of orange, lime, and silver for $99.99 after you've inked up the dotted line.
In this article: att, breaking news, BreakingNews, knick, matrix, pantech, pcd, propel, quickfire, qwerty, samsung, slate, utstarcom
All products recommended by Engadget are selected by our editorial team, independent of our parent company. Some of our stories include affiliate links. If you buy something through one of these links, we may earn an affiliate commission.
Share
Tweet
Share