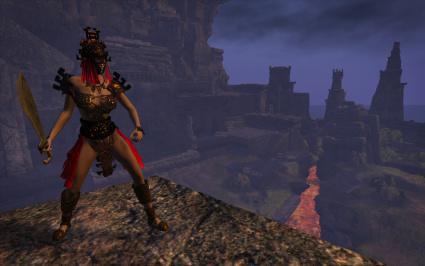 It's been a while in development, as the devs ironed out bugs and tweaked the system to get it just right, but the much-anticipated 'Patch 3' goes live this morning. The main feature it brings to Age of Conan is the PvP consequence system. No longer will players be able to gank other players without fear of reprisal. Accumulated 'murder points' will result in the dishonorable becoming outcasts from society, forced to rely upon a scattered few 'shady camps' for their supplies and rez points, attacked by guards on sight.

This means that being an unscrupulous PvPer will result in a whole new way to play the game, rather than just an arbitrary penalty. It looks a whole lot better than the original mooted plans for AoC, which involved jails and repetitive tasks that other players could watch you being forced to do.

Patch 3 isn't just about PvP. The Cistern dungeon has been revamped, and has undergone transformation into an instance. Tradeskills have had a radical rework, with brand new armor and weapons recipes now in circulation including the 'culture' pieces. And, of course, the combat system has been tweaked, which is already causing predictable outcries on the forums. The curious can browse all of the patch notes if they so desire.

In this article: age-of-conan, aoc, breaking, funcom, murderer, patch-3, pvp, pvp-consequences
All products recommended by Engadget are selected by our editorial team, independent of our parent company. Some of our stories include affiliate links. If you buy something through one of these links, we may earn an affiliate commission.
Share
Tweet
Share