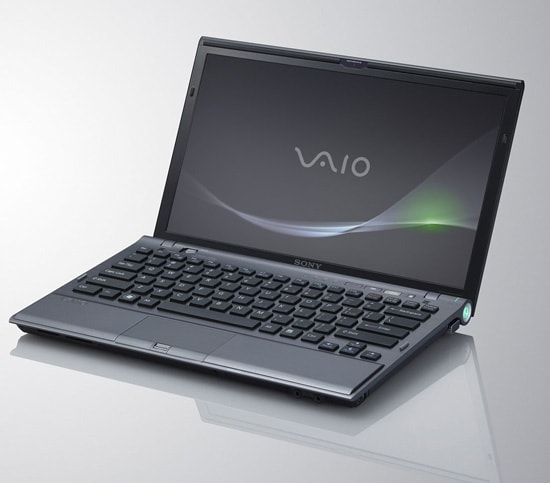 Here's the thing: Sony's VAIO Z series of ultraportables doesn't get to be a part of the X300 / Envy 133 / MacBook Air / X360 club. We like it, it's a great laptop, but it's just too chubby to count as a cake cutter. So that said, there's really little point in comparing this thing to that sort of computer -- we'll just have to judge it on its own merits.

The VAIO Z is the latest in Sony's long heritage of ultraportable computers, but lands itself decidedly on the beefy end of that spectrum. With discrete NVIDIA 9300M graphics and a Blu-ray drive, this is a full-fledged laptop (we've been testing out the $3,600-ish VGN-Z591U SKU). There's WWAN, SD and Memory Stick card readers, ExpressCard and an HDMI plug, and even the 16:9 13.1-inch screen is on the upper limit of Sony's ultraportable heritage. There's plenty of SSD inside, with dual SSD RAID option that makes no bones about this being a performer.

How would you rate the VAIO Z?
We want to hear what you think. Post a quick review now to join the conversation!
Write a review


And perform it does. We've thrown plenty of "mobile tasks" at the VGN-Z591U and it hasn't missed a step, with a particular acumen for video that would be welcome on its slimmer competition. Also of note, the VAIO Z produces plenty of heat, but doesn't run hot at all, instead efficiently expelling large quantities of hot air out a side vent with a rather quiet fan, making the laptop a great choice for actually placing on your lap -- especially considering how light it is, at a mere 3.4 pounds. The laptop loads Blu-ray movies with a speed that dedicated players can only dream of, and doesn't slow down for anything during playback. Online video is also no challenge for the laptop, an area where Intel's integrated graphics can struggle at times. Crysis was pretty choppy on medium at the full 1600 x 900 resolution, but that's no huge surprise.

We aren't crazy about the three hours of battery we averaged with the laptop. Sony's Stamina / Speed switch, which flips from discrete to integrated graphics without requiring a restart (and works quite well, by the way), seemed to be little help for battery life in our limited testing of the feature, but we'll leave that to the labs to discern ultimately.

Exterior-wise, the Z is a mixed bag. There's nothing particularly stunning about it, and a couple of trouble spots. The big one is the thin, LED-lit screen. It looks great, both in profile and in actual image, and while it's a glossy one, it's appropriate for the entertainment orientation of the machine. Unfortunately, the flexy, thin plastic housing of the display makes it feel like it'll snap in half, or perhaps snap off the machine entirely. We're sure it won't, but it doesn't quite feel "right" in use. Our other problem is with the cluttered design of the machine in general. Stickers galore on top, a seemingly random placement of ports, and four or five different textures and materials in use give it a slightly half-baked look. It's not ugly, but certainly not strikingly beautiful, and that counts for something in this market.

The keyboard and trackpad are great, we have no complaints. The trackpad is responsive and accurate, with a functional invisible scrolling strip on the right side of the pad -- would you expect anything less from Sony? The keyboard is one of the most tactile keyboards on a laptop we've used outside of a ThinkPad in recent memory. There's a depth of motion to the isolated, chiclet keys that make them very satisfying to type on, though some people might find them a bit too mushy for their liking.

Unfortunately, hardware is only as good as the software that runs on top of it, and that's where things start to fall apart a bit for the Z. Sony has made great strides in ridding the laptop of a majority of the crapware that has riddled Sony computers in recent years, but we're not totally out of the woods. Blame Vista or whatever you'd like, but within an hour of booting the computer for the first time, we have over ten items in our task bar, many repeatedly asking for our attention -- a majority of it security related. It took almost a day of use for the computer to settle down and believe us when we told it we're all set, and it's still bugging us about some Java and Live OneCare trivialities. Sony has told us they're working on a unified setup utility to simplify some of this, and it couldn't come quickly enough.

Our other major frustration was Sony's miserable so-called "SmartWi" connection utility, which basically acts as a vigilant barrier to the internet, standing in the way of our every attempt to connect to a local WiFi router, or switch up that connection as need presented itself. Just to make this more complicated, the Sprint EV-DO-equipped computer also included Sprint's connection manager installed out of the box, plus a wireless switch on the front of the computer, giving us (by our count) around six layers of WiFi connection management, with the only app capable of actually switching between access points (Microsoft's own) the hardest to access. The WinDVD BD app for playing Blu-ray discs is as janky as could be, and makes Vista turn off Aero with its janky ways, but works just fine otherwise. We naturally avoided the Sony-built apps.

Overall, we like the laptop for what it is, but we're not quite sure how it fits into our lifestyle, or exactly who Sony means it for. Performance users and gamers are usually after the 15.4-inch or 17-inch laptops, while serious road warriors are picking up the ultraslim laptops or netbooks out there to manage their Outlook inboxes. The VAIO Z is truly stunning in how much power it crams into such a little size and weight, but the Sony price margin and niche application might be a barrier to entry for most.

Fun facts: this review was written in WordPad on the Vaio Z, using the Vaio Z's keyboard, while playing a Sony-provided Shakira Blu-ray concert video and downloading / installing a Crysis demo for testing. Not a hiccup, and those hips don't lie.

In this article: features, review, sony, vaio z, VaioZ
All products recommended by Engadget are selected by our editorial team, independent of our parent company. Some of our stories include affiliate links. If you buy something through one of these links, we may earn an affiliate commission.
Share
Tweet
Share