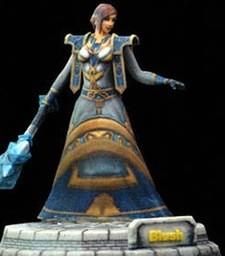 Blizzard has posted on the official WoW site that the Figureprints lottery is over, and though there are no big news items over on the Figureprints site, all mentions of the lottery have disappeared also, so it looks like if you've been waiting for demand to clear up over there to order your figure, now's your chance. Figureprints is a company we've covered extensively here at WoW Insider - they'll make little custom statues of your character with a 3D printer. A print will run you $129.95, but if you're willing to pay for it, you can have a custom-made real-life souvenir of the toon you've spent so much time playing in game.

The last time we talked to the guys over there they were working on all kinds of ways to make printing the figures easier and better, and it looks like they've found a few: Blizzard says that better methods have led to increased production, so even if you haven't heard from your lottery entry yet, odds are that you will soon. Unfortunately, they still haven't landed on a way to print out Hunter and Warlock pets to go along with those figures (their site still says they're working out how best to do it), so if you want Battlecatlol to go with your Hunter, Hemanlol, you'll have to wait a while longer.

Of course, like Rossi, you might still be saying to yourself, "what's the point?" But if you do want one, now's apparently the time to come and get it.

In this article: 3d-printer, custom, ed-fries, figureprints, hunter, lottery, pet, prizes, statue
All products recommended by Engadget are selected by our editorial team, independent of our parent company. Some of our stories include affiliate links. If you buy something through one of these links, we may earn an affiliate commission.
Share
Tweet
Share