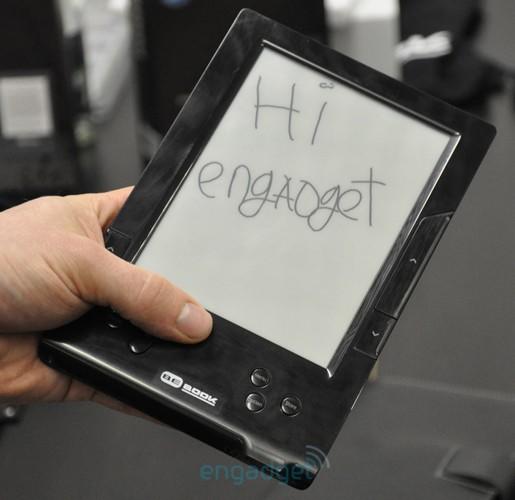 There it is, folks -- the BeBook 2. We knew Endless Ideas was bringing its next-generation BeBook to CeBIT, but we had no idea it'd be this well under wraps. We chatted with the company's CEO and managing director a bit about the direction of the BeBook as a whole, and they're very much believers in keeping format support wide open and giving readers the choice of where to pull content from. We were blessed with a few minutes of hands-on time with the new and improved e-reader, and while the software was still not finalized (thus our inability to photograph it more), we were impressed with what we saw.

The next iteration of the BeBook should be a serious contender in the e-reader market, particularly in Europe where Amazon's Kindle has yet to invade. The inclusion of WiFi and 3G is a good move (great move, actually), as those two additions open up all sorts of possibilities that non-connected readers simply can't access. As for the device itself? We're digging it. The build quality felt remarkably sturdy, the aesthetics were beautiful and the thinness was certainly notable. The e-ink display has also stepped up the greyscale level from the original BeBook, and battery life should remain the same despite not being as bulky. As you can tell, the screen also supports doodling, and it tracked inputs as well as we could've hoped. We still couldn't pry out a price, but you can be on the lookout for this to drop worldwide somewhere in the Q3 to Q4 2009 time frame. 46
In this article: bebook, bebook 2, Bebook2, breaking news, BreakingNews, cebit, cebit 2009, Cebit2009, e-reader, features, hands-on, in the wild, InTheWild, spy shot, SpyShot
All products recommended by Engadget are selected by our editorial team, independent of our parent company. Some of our stories include affiliate links. If you buy something through one of these links, we may earn an affiliate commission.
Share
Tweet
Share