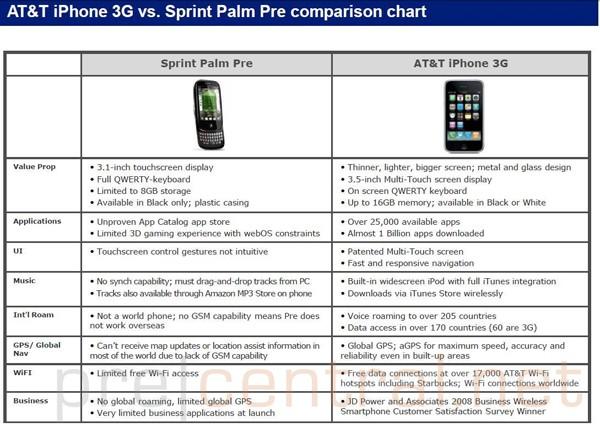 Need more proof that AT&T (and Apple, by proxy) is taking the Pre kind of seriously? Enter this internal document from the iPhone carrier exposing the Palm phone for what it really is -- a second-rate claptrap that is doomed to failure because of its inferior and stupid design. Among the highlights in this no-holds-barred slamfest -- similar to this Verizon / G1 hit piece -- is the comparison between WiFi (somehow the Pre has "limited WiFi access" because it can't connect for free in Starbucks), and the nasty burn which points out that the Pre is available "in black only." Ouch... Palm might want to stock up on aloe vera. In truth, though, the doc does point out some issues with the Pre that are very real, namely its lack of roaming capabilities outside of the US and an SDK which thus far won't allow for CPU-intensive apps like 3D games. It's significant that AT&T has deemed the phone worthy enough to address (internally at least), but it's also significant to see just how far the company seems to be reaching on a handful of these points. Just remember guys -- competition is a good thing.
In this article: apple, att, comparison, dis, hit piece, HitPiece, internal, internal document, InternalDocument, iphone, iphone 3g, Iphone3g, leak, leaked doc, leaked document, LeakedDoc, LeakedDocument, palm, palm pre, PalmPre, pre, slam, versus
All products recommended by Engadget are selected by our editorial team, independent of our parent company. Some of our stories include affiliate links. If you buy something through one of these links, we may earn an affiliate commission.
Share
Tweet
Share