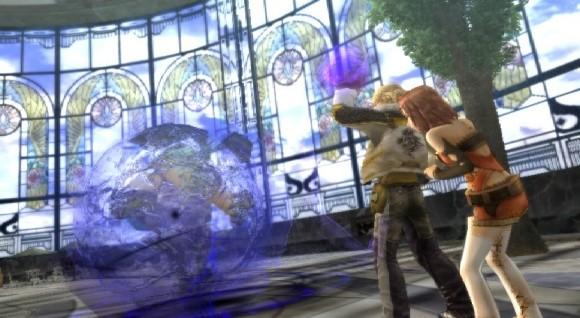 Square Enix's Akitoshi Kawazu was the very first person to diverge from Final Fantasy's formula, while simultaneously inventing it. Following the success of the original game, Kawazu created Final Fantasy II, which set precedent by lacking continuity with the world of the first game, but which also added named characters to the game, and removed the experience point system.

Akitoshi Kawazu: Actually, I wanted to do something like this ten years ago when I saw Grand Theft Auto. It struck me that we would have to create a Final Fantasy in this type of world. Now that we have the Wii platform, we can do this.

So you're saying that this is a large open-world adventure, seamless and expansive like Grand Theft Auto?

We are going for that openness and that high level of freedom. This title has a very fixed storyline, unlike GTA.

Open-world games are generally popular in the West. How do you make a game in that style for the Japanese audience?

We tried to give some instructions at the beginning of the game for the Japanese users who are used to being guided through the game. As you have seen in the opening part of the game, there is shooting and steering, so that users can get used to the game.

Tell us about the main character -- how he became a Crystal Bearer and what that means, what he's able to do with that power.

We do not know how he has become a Crystal Bearer in this title. His special ability is controlling gravity, meaning he can pull something or push something away or move himself toward or away from something.

To date, Crystal Chronicles has meant multiplayer games, or even My Life as a King where it's more of a simulation with parties going out and adventuring for you, but this is more focused on the single-player experience. How did you arrive at the decision to make this a solo game, and how will that affect the progression of the story in comparison to the previous Crystal Chronicles games?

We wanted this to be for a console that is for the family, and we thought solo play would be more suitable for that. There was some trial and error, because it is the first solo-play action game for the development team. However, we were all used to action games, so that part was fine. We made the characters' art style a little more mature so that the action would look cooler.

Will the other Crystal Chronicles, with the cuter character designs, continue as another branch?

Not sure about the style yet, and if it's going to be realistic proportions or not, but we would like to keep creating multiplay Crystal Chronicles titles.

We've seen, in trailers and recent gameplay clips, elements of "reactions" and "attractions." How does that system fit into the gameplay, and how will players be experimenting with those things?

With the Wii Remote, you will be able to the point at the monsters or towners and then swing them around with the motion sensor. They will react to you according to what you do to them.

Along with Dragon Quest Swords, this was one of the first two Wii games that Square Enix announced several years ago, and it's only now appearing. Can you talk a bit about the development process that's brought it to this point? It seems like it's been a while that it's been off the radar. How have you been approaching the game in all this time?

The development was always ongoing, but because of this new gameplay and new style of input, there has been a lot of trial and error before the title was presentable.

For a long time, Square Enix wasn't really talking about Crystal Bearers. Was the title ever in any danger during its development?

That has happened. It was a good challenge for me to overcome. It made me motivated.

Along with the difference in the graphic style, it seems like you may have changed up the music as well. Most people were surprised when they heard a sort of country and western tone start off one of the trailers. Are you going in a different direction in music, and is Kumi Tanioka back on the project?

Style-wise, we wanted to offer something more popular, something we were more familar with, more modern, rather than the classic music that the traditional Final Fantasy titles used. As for Kumi Tanioka, she was actually pretty busy with Echoes of Time and My Life as a Darklord. However, there are going to be some arrangements from past works, and there is going to be a new song that she wrote.

Crystal Bearers has always been associated with the Wii platform, but how has the choice of the Wii as the system of the game affected the development of it, and the direction that the game was taken?

At the very beginning of development, we did not try to use Wii's unique functionalities. I didn't tell my team that they had to use its unique functionalities. It's just, as a result, we did come to the conclusion that it's better to use Wii's capabilities to fully develop the game. But something that was not expected at the beginning of development was that Wii has become so prevalent among casual users, people who did not used to play games. That made us change our target audience -- we have to create something that will appeal to casual gamers.

Have you considered using any of the Wii's other features, such as the online capabilities?

There's no Internet functionality usage in this title. The reason being that there are so many Wii users who do not use that function, and we wanted all users to be able to enjoy the same environment.

The demo on the show floor starts with a shooting sequence and a flying sequence. How much of the game is this kind of alternate "event" gameplay?

I cannot give you specific details at this moment, but maybe what you've seen is about 1/10 of the unique gameplay. That's all we can say at this moment.

Since the gameplay style is more action-oriented, and the character's powers are his weapons, how do players have the same level of depth and progression that they would in a normal RPG?

The protagonist himself does not grow -- he's a superhero from the very beginning. But you can customize his accessories which will supplement his super power. That would give him more strength or defense power. With those accessories, his attacks could reach farther.

Is this the same team that created the Crystal Chronicles for GameCube, or does it consist of people from other games that we might recognize?

Overall, the members are pretty much the same except for the programmers. There is a quite significant change in programming. Actually, the main programmer for this title has worked on Front Mission.

The physics are reminiscent of Dawn of Mana, and we were wondering if there was any overlap between Dawn of Mana's team and the Crystal Chronicles team at all.

There are not many Mana staff in our team.

In terms of gameplay, is this something that traditional Final Fantasy fans are going to enjoy -- the ones who are used to turn-based Final Fantasy games?

I believe this will appeal to all gamers. I just hope that existing Final Fantasy fans won't stick to the old notion of traditional RPGs. We believe this is going to appeal to quite broad audiences.

The game's title is Crystal Bearers, plural, and yet Layle is kind of a maverick. Is he going to have to combat other Crystal Bearers, or learn to team up with other people to fight a greater evil?

Such a great question. Just guess, with the title!

The game has a more mature visual style than the previous Crystal Chronicles. Are there any direct connections between the previous games, or does this take place in a different world?

Is the storyline in this game going to spread out in other games as well?

There are probably going to be sequels to Crystal Bearers' story.

The Crystal Chronicles games have always appeared on Nintendo systems. Is that a deliberate choice? Do you see branching out into other platforms?

We cannot say anything definite at this point. Personally, I feel grateful, and it almost feels like my duty to stick to Nintendo, as the original GameCube title was created upon Yamauchi-san's request. However, as a company, Square Enix wants to go multiplatform, so we cannot say definite things at this moment.

We did receive quite a lot of support from Nintendo, but I don't think that's anything more or less than other developers.

In this article: Action-Adventure, akitoshi-kawazu, crystal-bearers, e3-2009, ffcc-crystal-bearers, final-fantasy-crystal-chronicles, Nintendo, square-enix, Wii
All products recommended by Engadget are selected by our editorial team, independent of our parent company. Some of our stories include affiliate links. If you buy something through one of these links, we may earn an affiliate commission.
Share
Tweet
Share