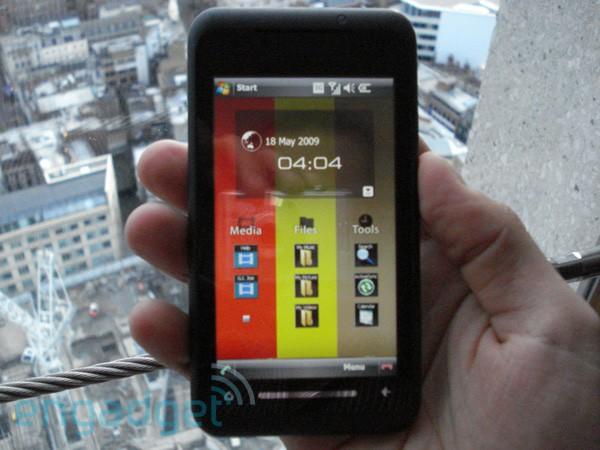 It may have already been teased, poked and prodded, but the TG01 from Toshiba still insisted on making a big splash on its arrival to the UK and we were only too happy to oblige and join in on its launch event in London. As you should know by now, this is Toshiba's most significant attempt to date at penetrating the consumer smartphone market, and it's coming equipped with a battering ram named Snapdragon. Keep reading for the juicy details on the UI, construction and general feel, as well as a neat stash of images and videos of the phone in action.


Let's get the (lack of) surprises out of the way first: the device is based on Windows Mobile 6.1, sports a 4.1-inch resistive touchscreen display, and is the first smartphone out of the gate with the Qualcomm Snapdragon chipset running at 1GHz. For a bit of quaint perspective, we can still recall -- with great fondness -- a time when a desktop computer running at such a speed was considered advanced.

Construction
The most impressive thing about this phone is undoubtedly the way it is put together. In spite of its screen size almost impinging on MID territory, the device feels light in the hand and its thin design makes it easy to handle. The back is protected by a flexible and lightweight plastic that still has a very robust feel to it. Attention to detail is evident throughout and analogies to Kubrick's perfect black monoliths may be overstating the precision of the engineering, but not by much. You can be assured of two things: 4.1 inches are not too much for a phone, and the TG01 is built to last. Mind you, the glossy screen is right in line with an unpleasant trend among tech companies toward shiny and reflective displays. Sure, colors are richly saturated, but try watching a movie with any dark scenes in it and you will experience true immersion into the film medium -- by seeing your face more clearly than the action. Smudges also, as you will see in the gallery, come as part of the glossy screen bargain.


User Interface
Toshiba has gone with a rather unique interface composed of stripes of interest, such as Phone, Media, Applications, and so on. The attempt to combine menu categorization with easily accessible submenu items is something of a hit-and-miss. On the one hand, it's useful to have one-tap access to regularly used features such as the web browser, but only three stripes can be on the screen at any one time and thus you often end up having to do a few swipes before getting to that one tap. And this is where much of the kudos earned by the TG01's external stylings is lost -- the hardware is simply not responsive enough to keep up with the intricacy of the UI. Oftentimes when trying to navigate through stripes your swipe will either go unregistered or move too far. Dialing and using the on-screen keyboard are similarly tortured experiences, but we're more willing to put those down to our crude and unrefined extremities.


Conclusion
Toshiba has certainly come out with a technically accomplished device: 800 x 480 resolution, HSDPA, WiFi and GPS are all packed atop a truly potent chipset, and the whole thing is wrapped inside an attractive package. Yet the overwhelming feeling after playing around with the TG01 for a while is one of frustration. The somewhat sluggish and unwieldy UI fails to properly tie together all the capabilities of the underlying hardware and the end product is a smartphone that can be said to amount to less than the sum of its parts. 11
In this article: edge, event, features, GPS, gsm, hands on, hands-on, HandsOn, HSDPA, hsupa, hsupa1, launch, London, mobile, Orange, Orange UK, OrangeUk, smartphone, Snapdragon, TG01, Toshiba, Toshiba TG01, ToshibaTg01, UK, umts, WiFi, Windows Mobile, WindowsMobile, WinMo, WinMo 6.1, Winmo6.1
All products recommended by Engadget are selected by our editorial team, independent of our parent company. Some of our stories include affiliate links. If you buy something through one of these links, we may earn an affiliate commission.
Share
Tweet
Share