Take a peek at graphical updates for SWTOR update 1.5

This RIFT 1.5 update trailer is approved for all audiences

PAX 2011: RIFT sifts through the Ashes of History 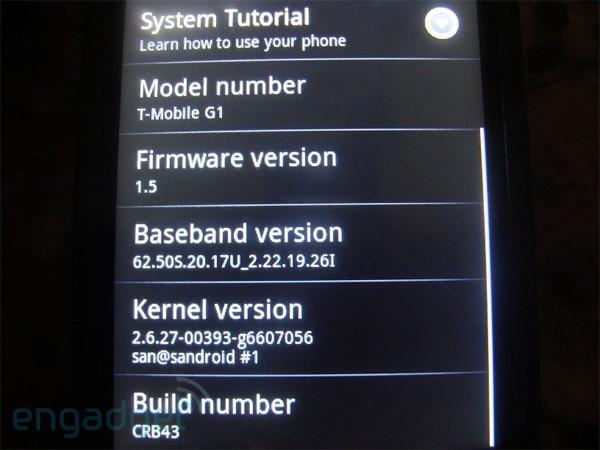 Pioneering T-Mobile G1 owners have been enjoying the spoils of Android 1.5 (or Cupcake, as it's known 'round these parts) for months now, but it looks as if that very treat will be the last taste of confectionery goodness that the smartphone gets. According to Android software engineer Dave Sparks, a time is soon coming when devs "wont be able to fit the latest [Android] release on the G1's internal flash," and yet another engineer has chimed in via Twitter to say that he "can't promise" that any update after 1.5 will fit. For whatever reason, HTC gifted the G1 with an incredibly meager amount of internal flash, and considering that no Android phone will support app storage / loading from a microSD card, there's no way to free up room for Donut, Eclair or Flan. You've been a real champ, G1, but without 2.0+, we just can't give you the love and devotion you truly need. Go on, call us fickle -- we deserve it.

Update: We've received a statement directly from T-Mobile on the matter, saying "We plan to continue working with Google to introduce future software updates to the T-Mobile G1. Reports to the contrary are inaccurate." It's unclear whether those are just going to be security and stability updates to 1.5 or whether we'll see wholesale new versions like Donut and beyond, but for the sake of G1 owners everywhere, we're hoping it's the latter.
In this article: 1.5, android, android 1.5, Android1.5, cupcake, donut, dream, firmware update, FirmwareUpdate, g1, google, htc, htc dream, htc g1, HtcDream, HtcG1, smartphone, t-mobile, t-mobile g1, T-mobileG1, update
All products recommended by Engadget are selected by our editorial team, independent of our parent company. Some of our stories include affiliate links. If you buy something through one of these links, we may earn an affiliate commission.
Share
Tweet
Share