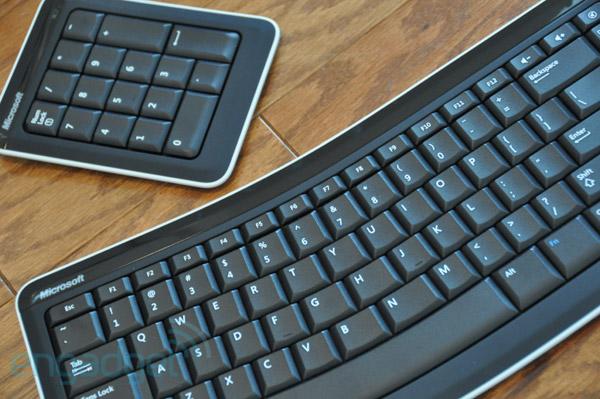 Earlier this year, one of our dear readers wrote in asking the collective audience which wireless keyboard was the best out there for their living room. We've since seen all variations of that very inquiry, but the most common one was this: "what's the best wireless keyboard for travel?" As more and more users resort to netbooks for getting things done on the go, more and more users are pulling their hair out as they attempt to bang out this month's sales report on an 85 percent full-size keyboard. A few months back, Microsoft let loose a new Bluetooth 'board that seemed perfect for the weary-eyed jetsetter, and we've been toying with it for the last little while. It's easily one of the thinnest and lightest keyboards we've seen, and the carry-along-or-don't numeric pad is certainly a nice touch. But is this slab of circuitry really what your digits need when typing on the go? Hop on past the break for a few of our impressions. The ruler-wielding folk in Redmond have determined that this here keyboard is Microsoft's thinnest ever, and one glance at it straight-on will have you believing. It's just barely thick enough in the rear to fit a pair of AAA batteries, and it tapers down toward the front. The whole board (numeric pad excluded) measures 13.9-inches across and 6.54-inches high, and the aforesaid number pad measures 4.02-inches and 6.26-inches, respectively. What's somewhat unique about this device compared to other "travel keyboards" is the design and build quality. Unlike most, the BT Mobile Keyboard 6000 actually feels sturdy. It's staggeringly thin, but yet remarkably rigid all the way across. There's no more keyboard flex in the center than there is on your average netbook, and unlike that netbook, the keys here actually have room to fit human fingers.

Microsoft also threw a literal curve in the design by modeling it with the company's own Comfort Curve layout. Those familiar with Redmond's ergonomic boards (like the downright luscious Natural Ergonomic Desktop 7000) will be readily familiar with the elongated G, H, B, T and N keys. We personally adore curved keyboards, so we were obviously quite fond of the layout found on the 6000. The good news is that there's no actual separation between the board's left and right sides, so even those who've grown accustomed to standard keyboards could quickly adjust.

The typing experience on the 6000 was nothing short of fantastic. It took us no time to get used to the curvy layout of the keys, and we're thrilled to say that the Control keys, the Enter key and the Backspace key were all perfectly placed -- for those unaware, it's that foursome of keys that usually drive people batty when learning a new keyboard. The key travel was also superb, and while the individual keys were definitely a tad on the "clicky" side, they weren't much noisier than the average laptop keyboard. The dimpled texture of each key was also subtle but appreciated, and the understated enclosure shows that this one is all business. Given the size, we were impressed to find volume up / down hotkeys as well as a mute button, and the Function key enables a few other mainstays to activate various commands (Print Screen, Home and End, for instance). We also tested this out on a Mac, and while it had no trouble connecting, it did act a bit wonky when using the Windows Start key as the Mac's Option key. In other words, this will do for hardcore Mac users, but be prepared to spend a bit of time remapping your keys to get things just right.

Microsoft has done well on the Bluetooth Mobile Keyboard 6000. It's impossibly thin, surprisingly sturdy and a real pleasure to type on. At $89.95, it's certainly not the cheapest option out there, but if you spend more time at a hotel desk than in front of your home desktop, it's a worthwhile investment. It's easily superior to even full-size laptop keyboards, and the flexibility of being able to position it anywhere is a real boon to those with growing wrist issues. We'd probably skip the $44.95 numeric keypad unless you make ends meet by hammering out tax forms, but if you deem it necessary, it's just as enjoyable to type on (naturally). Now, if only this thing were bundled with an equally impressive Bluetooth mouse...
In this article: bluetooth, bluetooth keyboard, bluetooth mobile keyboard 6000, BluetoothKeyboard, BluetoothMobileKeyboard6000, features, hands-on, impression, impressions, keyboard, microsoft, mobile keyboard, MobileKeyboard, number pad, NumberPad, numeric keypad, NumericKeypad, pics, pictures, portable keyboard, PortableKeyboard, preview
All products recommended by Engadget are selected by our editorial team, independent of our parent company. Some of our stories include affiliate links. If you buy something through one of these links, we may earn an affiliate commission.
Share
Tweet
Share