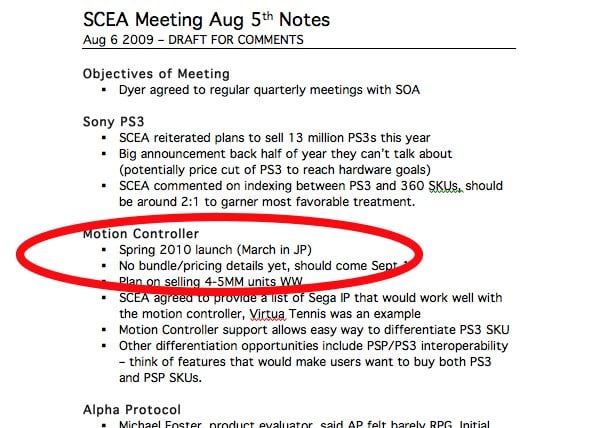 Is your name "harborneb?" It is? Then you might be out of a job. That's the name attributed to the author of a Microsoft Word document sitting on SEGA America's official FTP site at this very moment. The .doc file resides in SEGA's otherwise benign "news" directory. Now, it's very possible that the document could have been uploaded in jest as an Internet prank. But assuming it's real, then these meeting minutes between SEGA and Sony on August 5th reveal quite a few tantalizing details. Chiefly, that Sony will be launching its PS3 motion controller in Japan in March of 2010, Spring elsewhere. There's also discussion of PlayStation 2 emulation on the PS3 with a note that "SCEA wants to sell all PS2 titles on PSN (GTA Vice City/Sonic/etc)." Want more? Then hit up the read link and download the document yourself. Else, you'll just have to hope for news from the Tokyo Game Show kicking off Thursday.

Update: The document has been pulled. We've added the full text after the break.

Sony PS3
* SCEA reiterated plans to sell 13 million PS3s this year
* Big announcement back half of year they can't talk about (potentially price cut of PS3 to reach hardware goals)
* SCEA commented on indexing between PS3 and 360 SKUs, should be around 2:1 to garner most favorable treatment.

Motion Controller
* Spring 2010 launch (March in JP)
* No bundle/pricing details yet, should come Sept 1
* Plan on selling 4-5MM units WW
* SCEA agreed to provide a list of Sega IP that would work well with the motion controller, Virtua Tennis was an example
* Motion Controller support allows easy way to differentiate PS3 SKU
* Other differentiation opportunities include PSP/PS3 interoperability – think of features that would make users want to buy both PS3 and PSP SKUs.

Planet 51
* Sell in of PS3 SKU – SCEA noted that other movie titles on PS3 had underperformed as well (inc. Transformers) this cycle.
* Dyer suggests contacting Susan at Walmart and asking what she wants in the pack to sell this SKU (movie tix etc)
* Other possibilities are Hybrid movie disc (BD 25 or 50 with Game and Movie on same disc).

Vancouver 2010
* HOME, Olympic destination would garner a lot of positive attention from SCEA
* Should be doing same with Bayonetta, Marvel etc. Easy to launch in all territories.
* HOME merchandizing opportunities (clothes etc).

Yakuza
* Could put Japanese games directly on PSN for download in a special Japanese Import section (pricing $9.99 to $39.99 for full game).
* Might need to localize menus at least with subtitles.
* SCEA interested in helping on MKTG side if they can have period of exclusivity.

Iron Man 2
* Great candidate for HOME space – explore Tony Stark's lab etc.
* Should have one for Marvel in general.

Vanquish and Aliens: CM
* Opportunity for PS3/PSP interoperability (see Eidos Batman, Army of Two, Assassin's Creed for good examples).
* If we offer that SCEA would be really interested in having us at their booth next E3.

Thor
SCEA would like a look at the code soon.

Sonic Anniversary
* Could put out collectors edition with all old sonic games on one BD disc.
* "Best of Sonic" for around $99.
* SCEA would love PSN exclusive power ups/different game modes (like Castlevania's flip it over/backwards)

DC Digital Titles
* If we provide a list of DC titles SCEA will let us know which ones they're interested in having exclusively.
* If we give them a long period of exclusivity they'll give us more marketing support.

PSP Titles
* For SKU differentiation it's best to offer features that are slightly different from PS3 version.
* Titles that are coming up on PSP are Assassin's Creed II, GTA China Wars, Resident Evil, Little Big Planet – all massive franchises.
* SCEA has a specific PSP deck which they can send up with their hardware director for a chat.
In this article: controller, leak, meeting minutes, MeetingMinutes, minutes, motion, motion controller, MotionController, playstation 2, playstation 3, Playstation2, Playstation3, ps3, psp, rumor, sega, sega america, SegaAmerica
All products recommended by Engadget are selected by our editorial team, independent of our parent company. Some of our stories include affiliate links. If you buy something through one of these links, we may earn an affiliate commission.
Share
Tweet
Share