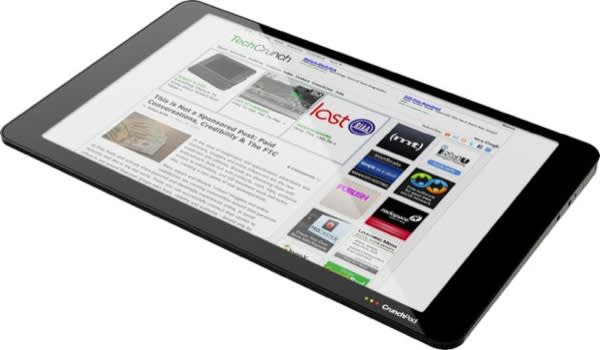 We're not super familiar with the term "steamrolling along" as it applies to device launches, but apparently it's good news for Michael Arrington's CrunchPad tablet. Mike dropped the news on a recent episode of Steve Gillmor's "Gillmor Gang" podcast (like "Gilmore Girls," but with less inter-generational drama), saying that he's not sure where the rumor of cost being too high came from, since costs continue to come down. The "$300 to $400" price range he's quoting is a bit higher than we'd heard previously, but it still sounds pretty good for a 12-inch touchscreen device. He also made mention of "soft revenue" and "sponsorships" on the device, akin to the revenue Firefox gets from its Google search box, and added that it won't impact the user experience. Outside of those tidbits Mike says they're working on making it "perfect," and that there should be some big news about the device coming shortly. Video is after the break, CrunchPad discussion starts at the 39 minute mark.

Via: UMPCPortal
Source: YouTube
Coverage: Gizmodo, Silicon Alley Insider
In this article: arrington, crunchpad, michael arrington, MichaelArrington, mid, slate, tablet
All products recommended by Engadget are selected by our editorial team, independent of our parent company. Some of our stories include affiliate links. If you buy something through one of these links, we may earn an affiliate commission.
Share
Tweet
Share
Save