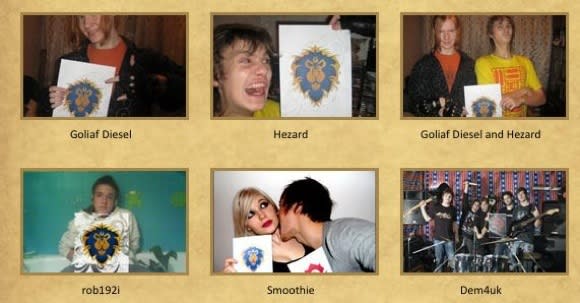 We posted about Blizzard's Warcraft anniversary minisite a while back, and since then, they've been busy, filling it up with even more content. The community interviews and the new Blizzcast haven't yet appeared, but there are many, many pictures on the Battlecry mosaic submissions section. Pages and pages of fans showing their support for the Horde or the Alliance. It's quite a sight to see, actually -- the pictures range from the straightforward to the silly to the very involved (one couple's posed up with their t-shirts and Frostmourne and logo and everything). There's quite a few whole-guild pics too. There's 43 pages total, so it's a lot to look through, but it's definitely worth a browse.

Ancilorn reminds us, also, that this is a contest -- as more and more pictures from each faction roll in, we'll have access to some mosaic art using these actual pictures, the first piece of which was just revealed today. They've featured some of their favorite pictures over on the Facebook page as well. This is turning out to be a pretty cool idea, and as I said in the original post, I bet we'll be seeing these pictures in lots of other places in the future.

In this article: alliance, anniversary-minisite, battlecry, battlecry-mosaic, blizzard, blizzcast, community-interviews, faction, faction-pride, fans, horde, mosaic, wow-5th-anniversary
All products recommended by Engadget are selected by our editorial team, independent of our parent company. Some of our stories include affiliate links. If you buy something through one of these links, we may earn an affiliate commission.
Share
Tweet
Share