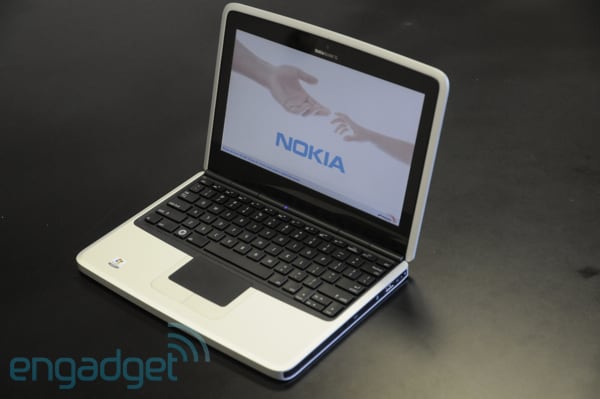 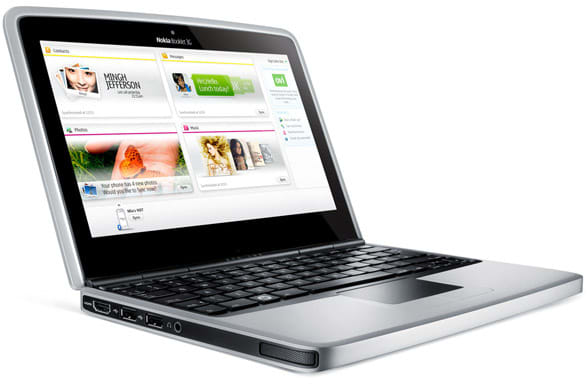 You might think MikroMikko is the name of some Asian fusion restaurant, but it was actually Nokia's first computer line -- and in 1987, the MikroMikko 3 was a state-of-the-art MS-DOS machine with 1MB of RAM and 20MB drive. It's been about 25 years since Nokia's made a computer bigger than an N900, but it's back in the game with its first netbook, the Booklet 3G. Nokia's pitching the Booklet as a top-of-the-line machine with an all-aluminum chassis, integrated connectivity and GPS apps, and at $599 it's certainly priced that way -- although inside it's got a low-power Atom processor and 4,200rpm hard drive. The Booklet 3G is one of the best-looking netbooks out there, but is Nokia's entry back into the market a winner? Click on to find out what we think of the entire system in our full review.

How would you rate the Booklet 3G?
We want to hear what you think. Post a quick review now to join the conversation!
Write a review

First things first: when it comes to looks and build quality, the Booklet's the belle of the ball. The chassis is carved from a single piece of aircraft-grade aluminum, much like the unibody MacBook. The entire machine feels solid and very thick, in a good way -- and we're really into the angled edges, although we can't quite explain why. On top of the aluminum lid is a high-gloss plastic cover (available in white, black, and blue) which unfortunately gets covered in fingerprints. You'll thank Nokia for the included soft cloth.

Although the Booklet's aluminum body makes it feel stronger than other netbooks, it also makes it slightly heavier: at 2.8 pounds it's heftier than the Eee PC 1008HA, but it's still comfortable to hold and carry in one hand. Nokia's also managed to fit the 16 cell battery (yes, 16-cells) flush to the bottom of the case, so the whole machine is just .78-inches thick, thin enough to nicely fit into a bag or purse. Around the sides of the machine you'll find three USB ports, an HDMI port, a headphone jack, and SD and SIM card slots -- but there's no VGA or Ethernet ports. We were frustrated by the latter when we traveled to a location that had a weak 3G connection and no WiFi network, although you can obviously buy a USB Ethernet adapter.

The first thing you notice when you open up the Booklet is the attractive 10.1-inch edge-to-edge glass display. While we could have done with a smaller bezel, the 1280 x 720 screen is high quality and much roomier than the usual 1024 x 600 netbook resolution. The LED-backlit display was actually easier on the eyes than we'd anticipated, and 720p video clips looked vivid and crisp.

Below the screen you'll find a familiar, chiclet-style keyboard, which honestly could be better. The keys themselves have a slightly rubbery, yet comfortable feel to them, but they're smaller than those on the HP Mini 5101, ASUS Eee PC 1008HA or the Toshiba Mini NB205. We can't help but wonder why Nokia didn't try and extend the keys to the edge of the keyboard deck. On the other hand, the trackpad was done just right. The pad itself is large enough to navigate the desktop and the dedicated right and left mouse buttons are responsive, though they're little louder than you'd expect. The pad doesn't support any fancy multitouch gestures, but we're just fine with that -- we'd rather have a good single-touch trackpad than a poorly-implemented multitouch unit (cough, HP!).

Nokia chose to use the lower-power Intel Atom Z530 instead of the usual N270 or N280 in the Booklet, and though it increases battery life, it's definitely more sluggish in performance. The Booklet could handle running Firefox and Word simultaneously, but adding an app like TweetDeck to the mix caused things to drag. Worse, we often got a "not responding" message when we tried to do "too much," like streaming a movie on Hulu while running Tweetdeck, AT&T's connection manager and Microsoft Word. And the numbers back us up; on Geekbench the Booklet scored 825 points, which was just under 100 points behind the HP Mini 5101's 920.

But the Booklet's sluggishness can't be blamed solely on the processor: it also has 4,200rpm, 120GB hard drive that's slower and smaller than the 5,200rpm units in most other netbooks. Again, the numbers have our back – it took the Booklet over a minute to boot Windows 7 Starter Edition (and the preloaded F-Secure security suite didn't help). Oh yes, the Booklet runs Windows 7 Starter edition, so forget about changing the desktop background or extending your desktop to another monitor.

We were happy to leave the Booklet's charger at home: its battery consistently ran for eight hours when we used the system at 75 percent brightness to browse the web and edit documents. That is longer than most netbooks with six-cell batteries which annoyingly protrude from the notebook, though the $399 Toshiba Mini NB205 runs for over 8 hours.

The Booklet also has an integrated SIM slot that lets you connect to AT&T's 3G network -- at $60 a month for 5GB of data. Around New York City download speeds averaged between 1.0Mbps and 1.5Mbps, while upload speeds ranged between .08Mbps and .30Mbps. On a train ride to the suburbs the experience was pretty smooth: the Booklet only dropped the connection once, but we blame that more on AT&T.

There's also assisted GPS in the form of an Ovi Maps widget for the desktop. It struggled to find our location while in an office building, but when standing next to a window it found our apartment location and plotted it quite accurately. Nokia also bundles its Ovi Suite for syncing a Nokia phone and its Social Hub software, which is useful for centralizing your social networks (Twitter, Facebook) to one desktop application. It also lets you easily send text messages from your SIM.

There's a lot to like about the Booklet: we were really excited about its beautiful design, high-resolution screen and embedded 3G connectivity -- until we started waiting around for it to load Windows 7 Starter, wondering if it was really worth $599 unsubsidized or $299 on a 2-year AT&T contract. We just can't forgive the slower processor and hard drive when there are significantly cheaper options out there that offer better performance -- and don't look so bad either. Straight up, the $399 Toshiba Mini NB205 is $200 less and performs better with a similarly long battery life, while Verizon offers the HP Mini 311 with a faster processor, NVIDIA Ion and hard drive for $199 on contract.

If you ask us, it all comes back to the MikroMikko and Nokia's recent inexperience in the laptop market. Sure, it's one of the world's leading mobile phone manufacturers (though Michael Gartenberg argues it needs to change drastically to survive as innovators), but when it comes to laptops and netbooks it's important to know the basics and get performance right before attaching a premium price to a product. The Booklet 3G is a great-looking netbook with stellar endurance, but its price and performance simply don't match up.

In this article: booklet 3g, Booklet3g, impression, laptop, NetBook, NetBooks, nokia, nokia booklet, Nokia Booklet 3G, Nokia Booklet 3G Mini Laptop, NokiaBooklet, NokiaBooklet3g, NokiaBooklet3gMiniLaptop, review
All products recommended by Engadget are selected by our editorial team, independent of our parent company. Some of our stories include affiliate links. If you buy something through one of these links, we may earn an affiliate commission.
Share
Tweet
Share