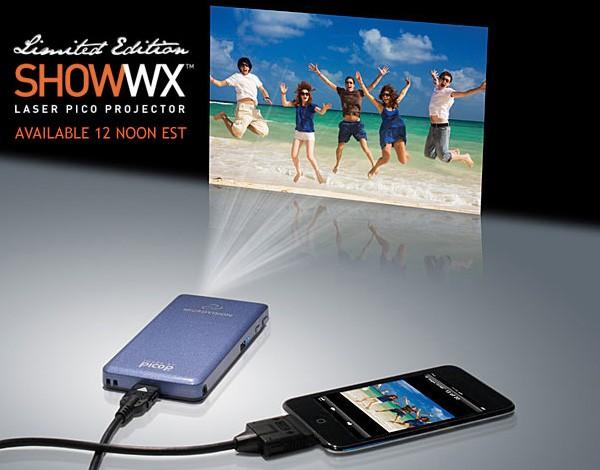 Okay, so maybe Microvision is a little late with the release of its pocketable Show WX pico projector, but we'd rather have a truly useful projector late than a useless one on time. This laser-based beaut will offer you infinite focus -- something we can vouch for having tried out the same technology integrated in a rifle -- which essentially means that no matter how much you twist or jerk the projector around, or how distant your projected surface is, the picture will remain in focus. An 848 x 480 resolution image can be scaled from less than six inches all the way up to 200, though you're most likely to stick with anything up to 30 in order to make the most of the 10 lumens brightness on offer. The contrast ratio is rated as being greater than 5,000:1 while the battery will last you up to two hours on a charge. The wallet damage is $549 for the standard edition, but the limited edition teased above jumps all the way to $999, for which you'll get a personalized splash screen, LE insignia, a certificate of authenticity, a VGA dock and some other trinkets. Come on, it has lasers inside, it was never gonna be cheap!
In this article: laser, laser pico projector, laser projector, LaserPicoProjector, LaserProjector, microvision, microvision show wx, MicrovisionShowWx, pico, pico projector, picop, PicoProjector, pocket projector, PocketProjector, portable projector, PortableProjector, projector, show wx, ShowWx
All products recommended by Engadget are selected by our editorial team, independent of our parent company. Some of our stories include affiliate links. If you buy something through one of these links, we may earn an affiliate commission.
Share
Tweet
Share