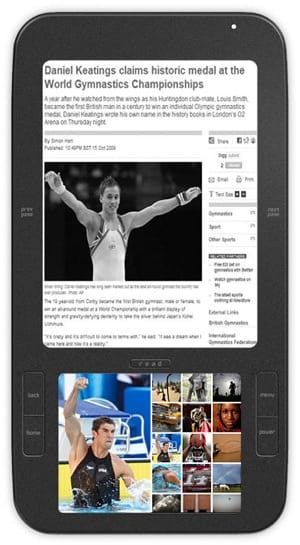 We realize that the e-reader market is about as crowded (not to mention overwhelming) as a Walmart on Black Friday, but ever since the dual-screen Spring Design Alex surfaced and we mistook it as the Barnes & Noble Nook, we've been incredibly intrigued by it. Though its 6-inch E-Ink display and 3.5-inch Android LCD form factor may seem like a riff on the Nook, the Alex has quite a few more tricks up its sleeve, including a full Android browser and the ability to extend what appears on the LCD to the E-Ink screen. And that's just the tip of the iceberg when it comes to all the unorthodox extras baked into the $399 Alex. Still, games and gimmicks only get you so far, and you're probably wondering if it has what it takes to pull up next to the majors like the Kindle or Nook and knock them from the top. We've got that answer and lots more details on what it's like to use two screens rather than one just after the break in our full review. Join us, won't you?

Be the first to review the Alex?
Your ratings help us make the buyer’s guide better for everyone.
Write a review

Flat out, the Alex looks and feels like an e-reader, but there are some subtle design differences that distinguish it from the others currently on the hunt for your dollars. Measuring 8.9- x 4.7-inches, it's about the size of a standard paperback, but more rectangular in shape than both the Kindle and Nook. At a glance, its longer and narrower shape looks a bit awkward, but ergonomically it's far from it – those dimensions actually make it easier to wrap a hand around, and we found holding it up to be exceedingly comfortable. The half-an-inch thick device is a tad thicker than the Kindle 2, but at 11 ounces, it's far from falling into the bulky or heavy category.

At first blush, there's nothing too striking about the Alex's mostly-plastic industrial design, yet -- for one reason or another -- we think it's duly attractive in both available hues (black and white). Beyond the E-Ink display and the 3.5-inch capacitive touchscreen below it, the Alex has five buttons, which can frankly get quite confusing at times. The small button between the two screens with Spring Design's squiggly logo syncs the LCD to the E-Ink screen; to the left of the LCD screen is a page back button, and a back button for the Android OS. Conversely, to the right are page forward and power buttons.

On top of the reader you'll find a 3.5mm headphone jack and microUSB port. An easy access microSD slot and dual speakers are around back, while a tiny microphone lives on the front right edge of the device.

As with the Kindle 2 and Nook, the Alex has a 600 x 800 pixel, 6-inch E-Ink display. The contrast and clarity of the grayscale (eight shades) screen is pretty much the same as the others, which comes as no shock since it's made by the same company. Reading Jane Eyre on a sunny day was pretty much the typical e-reading experience: the black text looked crisp, and there was the expected second-long refresh when we turned pages. In a side-by-side comparison with the Nook, the Alex took the same amount of time to flip a page -- the Kindle 2 was a hair faster than both.

Other than the physical page forward and back buttons, all the controls for the reader are contained to the Library application on the LCD. The interface isn't flashy, but it is intuitive and packed with features – it's easy to look through titles, flip to different chapters, jump to a specific page and add a bookmark. And for some reason, we could amuse ourselves for quite awhile by sliding a finger over the the rocker to jump to a different page. When it comes to changing the font size there are five size options, but unlike the Kindle and Nook you cannot change the font style itself. As for those that want to do more and annotate a book, you can highlight select words, add a note by typing on the Android virtual keyboard, or record a short audio clip. All those features work quite well in practice, but it was harder than anticipated to accomplish those tasks on the smaller screen – we prefer the experience on the Entourage Edge where you can just reach out and touch the E-Ink screen.

There's no doubt that the Alex is chock-full of reading features, but we just can't say the same about its book selection... at least at this point in time. While there's access to over a million Google Books that can be downloaded over WiFi directly on the device (no 3G version until the summer) there's only so many times we can read older classics like Dostoevsky's Crime and Punishment and H. G. Wells' The Time Machine before we find ourselves longing for the latest and greatest from Danielle Steel. We'll blame the whole 'being on the cutting edge of technology' thing for wanting some more modern titles, but in all seriousness, this may be a deal-breaking for those who prefer newer cuts. Spring Design has struck a deal with Borders and plans to roll out access to the e-book store in June, but for now you're stuck searching for modern day ePub, TXT, HTML and PDF-based books through sites like eBooks.com or EPubbooks.com and sideloading them to the device. Yes, it can be done, but believe us -- it's a unwanted hassle. We wish there were more onboard storage space for those books too – there's only 256MB of DRAM internally, though it comes with a 2GB microSD card. The Nook and Kindle 2 have 2GB of internal storage each and allow for adding more via an external card.

Browsing and other features

Usually it'd be at this point in the review that we'd conclude that a $399 e-reader lacking 3G and a well-stocked e-book store would -- at best -- make a good doorstop, but luckily the Alex's Android 1.5 browser and 480 x 320-resolution, 3.5-inch glossy touchscreen keep it from being doomed to such a fate. Before we get into the browsing experience we should mention that the capacitive nature of the panel makes all the difference – it's stupendously responsive and doesn't require too firm of a press to make selections.

The stock WebKit Android browser won't come as anything new to most, but the ability to clone what's on the LCD on the E-Ink display sure will. You can navigate to any webpage and hit the button in between the two screens to make it appear on the above E-Ink display. It's a pretty neat trick, and the ability to save the page as a PDF so you can read it later is even more impressive. However, after a bit of use we discovered that the sync mode only makes sense when you're actually going to read something on the E-Ink display -- when surfing or scrolling the E-Ink panel keeps auto-refreshing to keep up with what's on the LCD and looks like its having a perpetual seizure. Our biggest complaint about the Android experience is the lack of a menu button – in order to bring up the menu bar in the browser you have to hold down both the page back and forward buttons. It's frustrating to say the least, and it's not the slightest bit convenient to do every time you want to enter a new URL.

Spring Design plans to roll out an Android 2.0 upgrade sometime this summer, but for now it doesn't really make much of a difference considering the limited number of preloaded apps and lack of access to the Android Marketplace. Desperate for our favorite Android apps, we were able to download a few APKs (including those for Twitdroid and Facebook) and install them on our own. And to no one's surprise, the outfit also plans to launch its very own app store this summer. Starting to sense a trend? Yes, ironically, the summer is going to be a big time for Spring Design updates.

Other than the browser, the standard Email, Photo Gallery, Music and Calculator apps are preloaded. We certainly enjoyed listening to Kings of Leon on the surprisingly-loud speakers while reading, but watching a short video on the screen was sluggish and less-than-thrilling. We could see using the panel to watch a short YouTube vid, but we couldn't get the app to work and the browser doesn't support Flash Lite. Bummer.

In our few days with the 600MHz Marvell Monahan PX30x-powered Alex we found it to be an adequate performer and definitely not as sluggish as the Entourage Edge or the Barnes & Noble Nook. That doesn't mean it's blazing fast, it just means we weren't waiting endlessly for books to open or to get back to a previous web pages / menus. When it came to multitasking, the Alex was just fine for reading a book and listening to some music, but when we threw in web browsing things began to slow to a crawl. When we went to type in a URL or search term, it was a few seconds behind our typing. Similarly, running Twitdroid in the background caused the device to be incredibly laggy.

Unlike the Entourage Edge, it's very easy to turn off the LCD by hitting the power button to save some juice. With both screens and WiFi turned on, the Alex lasted about six hours on a charge. That's disappointing, but with the LCD off it stayed powered on for 24 hours. Oddly, there doesn't seem to be a standby or sleep mode setting, but at least the power adapter is small enough to fit into your briefcase.

We're not saying that Spring Design's Alex doesn't have a ton of potential, it just doesn't have enough books or connectivity options to justify its $399 price point today. Here's where we remind you that the Nook and the Kindle both go for $259, and both are equipped with 3G access right out of the box. We definitely dig the form factor and the ability to (semi)-legitimately browse the web on an e-reader, but at the end of the day this device is for reading books -- popular books that have been published in the last decade and can conveniently be found. We'll wait for the summer updates and the 3G version to arrive, but let's not kid ourselves, by then we'll probably be looking at an entirely different e-reader / tablet ecosystem. Right, Apple and Microsoft?
In this article: alex, android, android 1.5, Android1.5, e book, e book reader, e books, e reader, e readers, e- reader, e-book, e-book reader, E-bookReader, e-books, e-reader, e-readers, eBook, ebook reader, ebook readers, EbookReader, EbookReaders, ebooks, feature, featured, features, google, reader, review, Spring Design, Spring Design Alex, spring designs alex, SpringDesign, SpringDesignAlex, SpringDesignsAlex
All products recommended by Engadget are selected by our editorial team, independent of our parent company. Some of our stories include affiliate links. If you buy something through one of these links, we may earn an affiliate commission.
Share
Tweet
Share