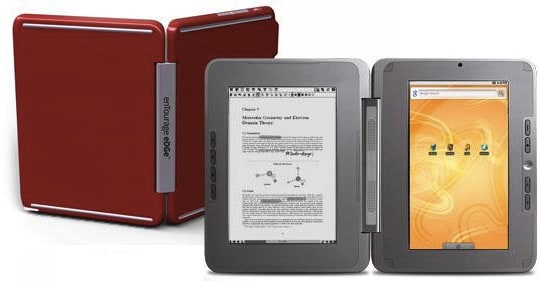 Is it an Android tablet? An e-reader? Just a sweet gadget with two screens? Truth is the Entourage Edge is a little bit of everything, and that's exactly why we've been so intrigued with the "dualbook" since we fondled it at CES. Finally ready to make its shipping debut, the $499 dual screen device is aimed at students, but really it's for anyone interested in a combination 9.7-inch E Ink reading / note-taking experience and a 10.1-inch Android web tablet. It's sounded very cool to us for quite a while, but there's always a difference between hype and reality. Does the Edge live up to its promise or attempt to do too much? The only place to find out is after the break in our full review. How would you rate the eDGe?
We want to hear what you think. Post a quick review now to join the conversation!
Write a review

Here's the thing about the inch-thick Edge – it's large. The size of a netbook large. It's not only thicker than most e-readers – three times thicker than the Kindle DX -- but it's heavier too. Holding up the three-pound device while lying on a couch was more of an upper body work out than we'd care for, but we do assume most students will stand it up or lay it flat on a desk. And like the Motorola Backflip, the Edge has taken some yoga classes: it can do the reverse clamshell and flip its screens so that they lie back to back.

We'd be lying if we said we thought the Edge was attractive. When closed the glossy white and boxy design continually made us think that it belonged in a sterile hospital room, and its silverish gray trim doesn't really do much for us either. Entourage does plan to offer a variety of colors, but it's still quite vanilla looking. The other thing that makes the Edge look like a laptop is the number of ports that surround it: two USB, a micro-USB, mic and headphone jacks, and SIM and SD card slots. A stylus is tucked into the side, and a curious three megapixel camera lives above the LCD screen. We looked through Android menus for about 20 minutes before we realized there's no way to use it -- a future software update will apparently enable camera functionality.

Like the Kindle DX, the Edge's 1200 x 825-pixel, 9.7-inch E-Ink screen is spacious and fits more text on the page than the average six-inch reader. As usual, there's a fairly long refresh when turning pages and zooming in on text, but we really found the overall reading experience to be pleasant. It's easy to page through a book using the physical forward and back buttons, though it would have been nice if finger swipes on the touch-enabled E Ink display did the same.

Speaking of the touch, it's pretty nice: you can underline/highlight text and jot down notes in the margin or in a separate journal page with the included stylus, and you also can save a marked up page or journal document as a PDF and then easily transfer it to the LCD screen and email it to a friend. Pretty impressive, but because the screen is E Ink based the writing experience is laggy; there's about a second delay until the text shows up. Those worried about missing a word can always launch the Android audio recorder which uses the Edge's dual microphones. They picked up a bit of background noise when we recorded a meeting, but we could clearly make out the conversation.

As an e-reader the Edge is actually solid until it comes to buying books. Though you can download books over the air from the Entourage Edge store, the selection is lacking compared to Amazon and Barnes & Noble's e-book stores, not to mention quite expensive. Entourage says there are over 225,000 trade books, 65 current New York Times best sellers as well and over 1,500 newspapers in its store -- we found some titles by our favorite authors including Nick Hornby and Jodi Picolt, but when searching for others like John Grisham we came up empty handed. The company is really banking on people using the device to download free ePub books and PDFs from Google Books. You can actually do this right from the Android browser on the LCD screen; once you download a book the Edge automatically puts it in your library and will open it on the E Ink display. You can also sideload content either using the SD slot or by transferring files to the 4GB of onboard memory directly from your desktop.

It's when you start using the 10.1-inch Android tablet on the right side that the Edge shows signs of weakness. While the standard Android 1.6 apps are present and Entourage has also thrown in Docs to Go, the Edge doesn't support the Android Marketplace. Yes, this means no downloading your favorite Android apps, and yes, it sucks. We felt lost without our go-to internet radio and Twitter apps. As a consolation, we're also told that the company is planning on launching its own Android app store for the device soon.

The rest of the Android experience is also quite mediocre. To its credit the company has added a nice shortcut bar to the home screen with icons to the library, bookstore, browser and e-mail, but the resistive touchscreen gets in the way of smoothly navigating menus and browsing the web. While we got the hang of having to press harder on the screen and on the virtual keyboard, we seemed to select the wrong links and letters more often than not. There's a trackball on the right to make up for it, but it just felt counterintuitive to switch between the screen and the ball. In the end, the tablet is best used for light web browsing, checking email and listening to some music -- the speakers between the screens are actually fairly loud. Oh and while the company promises Flash Lite support, we couldn't get YouTube videos to play in the browser, and the YouTube app isn't preloaded.

As for performance, we don't necessarily think the Edge is slow -- it's just not fast. It certainly isn't as fast as an Atom netbook or the Snapdragon-powered Nexus One, but the Marvell Armada PXA168 processor was fine for keeping open a few browser tabs and playing some music in the background. However, it was sluggish when having to backtrack through menus. WiFi browsing speed was decent; it took 4 seconds to load Engadget.com. There's a SIM slot on the top of the device, but like so much else on the Edge, it hasn't been enabled yet.

Battery life is really dependent on what you're doing. With WiFi and both screens turned on the Edge only lasted four hours. That's pretty awful for an ARM-based tablet like this, but if you turn off the LCD screen in settings – we wish there was a physical switch for this – it should get over 16 hours of standby. (That's still less than the Kindle's three days.) Oddly, when we closed the device it didn't go to sleep, but this will apparently be fixed in the first firmware update. Still, you'll have to charge the Edge quite frequently -- too bad the charger is larger and less portable than most laptop AC adapters.

Yes, the Edge is a combination e-reader and a Android tablet -- it just doesn't quite work well as either. For $499 there are just too many issues with it, including its chunky body, skimpy e-book selection, frustrating touchscreen, poor battery life and lack of Android apps. While promised software updates may yet fix enough issues and enable enough features to perhaps make it a decent textbook replacement for some students, we just can't say that its worth the cash right now. And so our wait continues.
In this article: android, android 1.6, android tablet, Android1.6, AndroidTablet, Dualbook, DualScreen, dualscreen e-rader, DualscreenE-rader, DualShock3, e book, e book reader, e reader, e-book, e-book reader, E-bookReader, e-ink, E-inkReader, e-reader, EBook, ebook reader, EBookReader, Edge, entourage, Entourage eDGe, EntourageEdge, eReader, review, tablet
All products recommended by Engadget are selected by our editorial team, independent of our parent company. Some of our stories include affiliate links. If you buy something through one of these links, we may earn an affiliate commission.