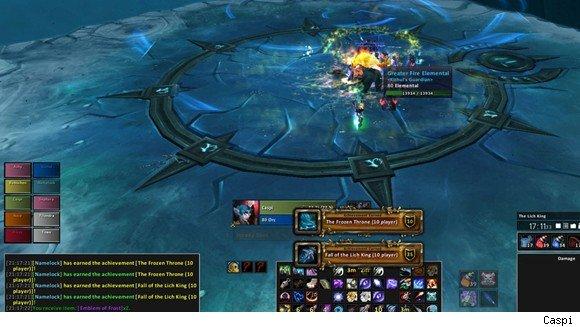 You'd think that the guy who has the third highest number of achievement points in the world would be a little uptight, a little bookish, maybe even a little anal retentive ... You'd be wrong. Caspi of EU Terrordar is so laid back, so friendly, so enthusiastic about the game that we had to break the rules and leave in all the smilie emoticons he peppered throughout our e-mail interview. They were just that infectious. A solid guild, a tight group of friends who enjoy spending time together, and an abundant sense of adventure have boosted Caspi to an astounding 11,495 achievement points. The only achievements he lacks are for Icecrown Citadel accomplishments that his guild is currently still working through. How'd he do it? Does he have a life? With gusto, and absolutely -- and we'll show you how, after the break.

15 Minutes of Fame: Good heavens, man, you do it all! Do have any primary focus in game, or do you truly enjoy every part of it?

Caspi: In my opinion, a good mix is the key. Raiding is still fun, but when the raid is over, it's really enjoying to queue some BGs with friends, build up some classic raids like Sunwell or just do five-man heroics.

Arena is also a big factor for me in the game. The first two WotLK arena seasons (season 5 and season 6) were quite unbalanced, but they changed a lot in terms of class balance, so the last season was fine for me.

The main goal for me is to having fun in all aspects of the game. I also have a level 80 death knight alt, but I'm not really a friend of alts, so I'm logging in one day a week for a heroic with friends or something.

It's obviously taken quite a while to rack up this many achievements. How old of a character is Caspi?

I've been playing my hunter since the release. My /played is 491 days. Before that, I played games like Quake 3, Counter-Strike and stuff. Some friends told me "Let's test it," and yeah, I bought WoW on release day -- and it was fun. :D

Did you know as soon as achievements were implemented that you wanted to work toward getting as many as possible? Or was it just something that happened along the way?

A really good friend and I started immediately when the system went live. We logged in, opened the achievement frame and it was like "WOAH." :D We started with some easy stuff like LEEEEERRRRROOOOOOOYYYY!!!!!111 for warmup but went early to the battleground stuff. It was so much fun; I think we did that eight hours in a row before we felt asleep. =D The next day, we explored some zones, fished in some schools and stuff before we queued for battlegrounds again. The beginning time was absolutely amazing.

Which achievement did you find the most difficult to complete?

Hum, the most difficult achievements for me are these immortal ones like He Feeds On Your Tears and The Immortal. It's really difficult to motivate people in your raid who don't give a *beep*. :D

The most difficult PvP achievement is definitely The Arena Master for most of the achievement hunters. It's really, really hard for people who never had the motivation for PvP (or specifically, Arena) to get this done.


Which achievement did you find the most boring or annoying to get done?

Most of the achievements are fun, but one achievement was really, really annoying: Frostbitten, where you have to kill all of these rare mobs in Northend. My last rare to catch was King Krush in Sholazar Basin. I camped him more than six hours without a break, flying around and stuff. You know what's coming next -- I took a break to pee and stuff, but when I came back five minutes later, King Krush is in front of me, DEAD. End of the story. One day later, I killed him while doing dailies. :P

Some achievements are a bit stressful and took some time, but at the end of the day when the achievement frame is popping up, my heart is filled with peace and love. =D

What was the most fun you had getting an achievement?

The two most fun achievements for me are definitely the road to Battlemaster and Glory of the Hero. It's so much fun with a little group of friends, and I enjoyed it a lot!

Which achievement are you most proud to have earned?

This question is easy. Three words: Ashes of Al'ar. Back in the day, level 70 times, we killed Kael'Thas with our guild. I think it was the sixth or seventh kill, something like that.

We heard rumors about the mount and the drop rate and yeah, here we go. Everyone was excited as hell, and the officers finally decided to roll it out. I tied the highest roll with a girl who played a MALE TROLL. In the second roll between the -> MALE TROLL <- and me, my heart was beating like a jungle drum! But this time, the luck was on my side. :D I teleported to Shattrath, where 100 people were waiting for me and the mount. It was really exciting. :D

All these achievements ... So much time! How many hours do you typically play per day/week?

You know, on raiding days like Icecrown Citadel or something, I play like four to five hours a day. But it's very different. Some days, I play less than 2 hours; sometimes more than six, when it all comes together (PvE, Arena and stuff).

At this point, what achievements are still left to do?

The last missing achievements for Glory of the Icecrown Raider are All You Can Eat from Sindragosa in 10- and 25-player mode. In 10-player mode, we are able to finish it this week. 25-player is a bit complicated in terms of Lich King heroic tryouts. I don't think you can do that achievement easily in heroic mode without a big loss of attempts. But maybe we'll skip one week and go for the achievement ":D" to finally get the drake!

You've overwhelmed us with your persistently positive attitude. We're sure that you'll likewise overwhelm even the most difficult accomplishments.

Last but not least, I want to thank my whole guild and my 10-man raid for making this possible. Thank you guys for being so patient with me. :D

"I never thought of playing WoW like that!" -- neither did we, until we talked with these players. From an Oscar-winning 3-D effects director to a rising pop singer ... from a quadriplegic player to a bunch of guys who get together for dinner and raiding in person every week.

In this article: achievements, achiever, Caspi, featured, world-of-warcraft-interviews, world-of-warcraft-people, wow-community, wow-interviews, wow-people
All products recommended by Engadget are selected by our editorial team, independent of our parent company. Some of our stories include affiliate links. If you buy something through one of these links, we may earn an affiliate commission.
Share
Tweet
Share