R. Lai
@richardlai
April 1st, 2010
In this article: amoled, android, android 2.1, Android2.1, bravo, cellphone, desire, featured, features, htc, htc bravo, htc desire, htc sense, htc sense ui, HtcBravo, HtcDesire, HtcSense, HtcSenseUi, mobile phone, MobilePhone, phone, review, sense, sense ui, SenseUi, smartphone, video
Following the Legend, HTC continues its Android 2.1 lineup with the Desire -- a gorgeous cousin of the renowned Nexus One. We can trace our drool all the way back to the Desire's leak in December, but there have been some changes since then that made it slightly less desirable -- DivX support and 720p video capture never made it to the final build, but it's not like the company laid down any official promise on them, right? Anyhow, there's still plenty to be loved here, namely the speedy 1GHz Snapdragon, the large AMOLED screen, and HTC's latest revision of Sense UI that we've already seen on the Legend. Now, there are probably two questions floating in the minds of our readers: is the Desire worth the extra moola over the Legend? And is it any better than the Nexus One? Let's all find out together. 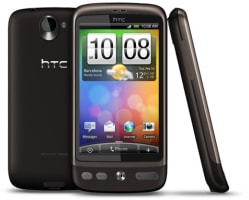 
The Desire has so much in common with the Nexus One that it feels like we've seen it all before. Spec-wise these two Android 2.1 phones have the same processor, 1,400mAh battery, 3.7-inch 800 x 480 AMOLED screen, 5-megapixel autofocus camera and 512MB of ROM, while externally they have very similar CMF (industrial shorthand for "color, material and finish") and weight (4.76 ounces). As for differences, the Desire packs 64MB more RAM than the Nexus One (512MB), lacks a second mic on the back for noise cancellation (more on this later), and dons physical buttons plus a clickable optical trackpad below the screen. We certainly prefer these real buttons since the Nexus One's touch-sensitive keys do sometimes miss our inputs; on the other hand the Nexus One may offer a better single-hand operation with its keys closer to the screen. Funnily enough, it looks like the Legend has the best of both worlds.

A closer look will also reveal the general structural differences between the Desire and the Nexus One -- in theory, the latter's unibody frame should be stronger than the Desire's old-fashioned assembly, but we haven't dared to apply more force on either solid devices to prove this (unless our good friend Peter Chou gives us his blessing). That said, if you're into hardcore tight jeans, then the stone-cold Legend should probably outlast the other two phones with its greater unibody coverage on the back.

To get to the battery, SIM card slot and the spring-loaded microSD slot, you need to rip open the back cover using the top slit, just like on the Hero. It's not a pleasant experience, as you'll see in the video below -- in the early days it felt like either our fingernail or the cover could break, and we'd kill for a slide-and-pop mechanism like on the Nexus One's smaller cover. Leaving this annoyance aside, both covers have similar "soft touch" suede-like textures -- certainly a warm welcome in the cold mornings, and it gives a comfortable grip as well.


Underneath the cover you'll see that the camera, LED flash and loud speaker are at the same positions on both devices, except for the missing noise-canceling secondary mic on the Nexus One. Are we missing much with just one mic? Not really -- in our comparison test, we noticed that calls made on the Desire (using the same O2 SIM card) are muddled only ever so slightly, and the phone certainly doesn't peeve your ears with distorted background noise as produced by the Nexus One. Have a listen yourself:


While we're on the topic of audio quality: both speakers on the Desire do their jobs well -- we had no problem with the earpiece for phone calls, and the loudspeaker on the back is, well, pretty loud and clear. The handsfree kit, however, fails to impress as it barely fits in our ears, and the sound quality is on par with the cheap iPod earphones -- it lacks bass and clarity, making the stylish three-button remote control (backward, play / pause / call, forward) a bit of a waste. Too bad this is also bundled with the Legend and the Nexus One.

The Desire's screen needs no introduction -- we've already gone through the ups and downs of AMOLED in our Legend and Nexus One reviews, plus it appears to be identical to the Nexus One's anyway. Just for comparison's sake: the Desire offers sharper image than the Legend due to its higher pixel density (240 dpi versus 160 dpi), but both screens are equally hopeless when used in daylight -- basically, you'll most likely be seeing your own face while you try to watch the Trololo guy on YouTube. Let's hope that HTC will hook us up with some Super AMOLED love in the near future.

For our battery tests, we followed a similar routine as we did with the Legend -- occasional web browsing on 3G connection, took some photos and videos, almost continuous music playback (with the occasional FM radio), Twitter auto-updating, Gmail push notifications and no live wallpaper. This way we managed to squeeze six hours out of the battery, which is coincidentally what we got from the Legend and the Nexus One as well. We also did tests based on a more realistic usage -- same background apps, occasional web browsing on WiFi and no or little music playback -- and this got us two more hours. Needless to say, it's best to keep the charging cable handy throughout the day.


Given that all three phones have a 5-megapixel autofocus camera, we expected the same picture output from them all, but HTC's full of surprises. For starters, the Desire captures 5:3 wide still images, while the Legend does a narrower 3:2 and the Nexus One takes the good-old 4:3. Similarly, for video capture the Desire, Nexus One and Legend offer 800 x 480, 720 x 480 and 640 x 480 resolutions respectively. There's a mixture of color accuracy as well, with the Nexus One performing the best out of the three, whereas the Desire's photos tend to have a colder tint. That said, one thing that they all have in common is the weak filming performance in dark environments -- as with the Legend, you'll see reduced frame rate in videos recorded by the Desire under low light level. This could be HTC's attempt to compensate darkness by extending the exposure time, but we're pretty certain that many would prefer a smoother video.


In general, the photos were of fair quality despite the aforementioned color issues. Daytime photos were slightly under-exposed but reasonably sharp, while nighttime shots looked great but also marked with a bunch of noise lines. Close-up shots were surprisingly good (see the keyboard photos), especially when you could go all creative using the tap-to-focus function in the camera app -- something badly needed on the Nexus One. All in all, you can't expect premium photo quality from the Desire (or any HTC devices, it seems), but the camera's there if you need it.
%Gallery-89492%


We don't need to say much here as we've already praised the latest Sense UI's new features -- the Friend Stream app, Leap (homescreen switcher, as pictured below), great keyboard and the enhanced text highlighting tool -- in our Legend review. Similarly, the Desire and the Legend both support the same wide range of audio file formats (AAC, AMR, OGG, M4A, MID, MP3, WAV and WMA) -- note that the Nexus One doesn't support Apple's M4A. Update: turns out the Nexus One supports M4A as well, but this wasn't mentioned on either Google's or HTC's spec pages. Given how smooth the general Sense experience was for us last time, we haven't noticed any significant performance increase on the Desire. That said, with the Desire packing 576MB of RAM while the Legend only has 384MB, it's safe to say that the big daddy can handle more apps at any time. We've also spotted some minor differences between the Desire's build of Android and the Legend's -- like the Nexus One, you can apply live wallpapers on the Desire as well, whereas the slower Legend lacks such option (although the Legend is the only one out of the three that lets you have a dedicated lock screen wallpaper). As with most sophisticated eye-candies, the live wallpapers do make the OS slightly choppy from time to time, and needless to say they'll have an impact on the battery life as well, so it's not something you'd want if a charging source is out of reach for some time.

Like the Legend, you'll also get the Flash Lite plugin on the Desire. As you might've already seen in the video earlier, Flash definitely performs better on the Desire thanks to the faster Snapdragon processor, but there's still a lot of work to be done here. Out of the several sites that we tested with, only the videos on BBC News' website had an acceptable frame rate, so using Flash on the Desire is pretty much a gambling game on the video data rate. (You can see our Flash plug-in hands-on in the first video.) On a similarly annoying level, the Desire lacks voice-to-text input as found on the Nexus One and other "Google experience" phones -- not the end of the world for us but some drivers may miss it.


The Desire is yet another fine piece of work from HTC – build quality is top notch as usual, and there's little to complain about the software except for the Flash performance. Some may argue that the Desire lacks freshness since the Nexus One's already shown it all, but we'd disagree – at the end of the day it's mainly about the software and service, plus the Desire is available from more carriers to begin with (outside the US, anyway).

So, circling back to our earlier questions, for the extra cost of the Desire over the Legend you get a larger and sharper screen, faster processor, live wallpapers and video capture at a slightly higher resolution. On the other hand the Legend's button positions may provide better single-handed operation, and some may even prefer its silver metallic look and feel to go with certain Apple products (sorry, it's unavoidable), so you'd best get your hands on the two devices before handing over the cash. As for the Nexus One, despite the fancy dual-mic noise cancellation, unibody frame, touch-sensitive buttons and a trackball that glows, the only real advantages we see in it are its voice-to-text input and its slightly better camera (and this might only apply to certain batches since HTC might be sourcing from multiple sensor suppliers). We prefer the Desire with its more natural call voice (with its single mic), buttons that respond better, durable optical trackpad (which may not be everyone's cup of tea), and an excellent social networking aggregation service.

Of course, if you're really into the Nexus One's little glowing ball and touch-sensitive buttons, you can always try flashing the Desire ROM onto it (at your own risk, naturally). Have fun!
All products recommended by Engadget are selected by our editorial team, independent of our parent company. Some of our stories include affiliate links. If you buy something through one of these links, we may earn an affiliate commission.