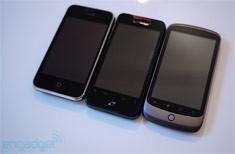 You know how we've good reason to believe that Verizon Wireless is at least mulling the switch to capped / tiered data plans? Yeah. An independent Validas research report has found that, between January and May of this year (pre-AT&T caps), Verizon's stable of smartphones collectively averaged more data consumption per month that Apple's iPhone. Of course, this quite literally compares an Apple to every smartphone on Verizon save for BlackBerries, but given how much squalling we've heard from Ma Bell about this rampant iPhone data usage, we're pleased to see a few facts that spin things the other way. The company's full report is due out in September, but investigation of over 20,000 wireless bills found that VZW smartphones "are consuming more wireless data than AT&T iPhones by a ratio of roughly 1.25:1," with the average Verizon user eating up 421MB per month and the average iPhone user consuming 338MB per month. It also points out that "nearly twice as many Verizon Wireless smartphone users are consuming 500MB to 1GB per month compared to AT&T iPhone users." You learn something new everyday, right?

"Averages can be misleading because when you plot data users in a distribution, you quickly see that there is no typical user – they are spread across a broad range," says Ed Finegold, Executive Vice President-Analytics, for Validas. "The key detail in this study that drives the average is that, by percentage, nearly twice as many Verizon Wireless Smartphone users are consuming 500 megabytes to 1 gigabyte per month compared to AT&T iPhone users," Finegold says. More than 11 percent of VZW Smartphone users fall into this category, versus just 5.6 percent of iPhone users.

The data for this analysis was derived from more than 20,000 consumer wireless bills dated between January and May of 2010. "Smartphones" deliberately excludes BlackBerry devices which, due to data compression techniques, do not follow similar data consumption patterns to those of iPhones and other Smartphones.