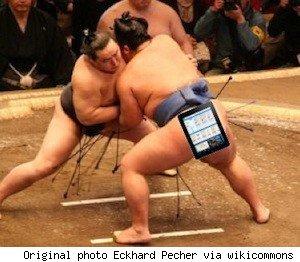 What do you do if you run a stable of sumo wrestlers who are charged with illegal gambling, assault, and drug use? Most likely, you help the authorities in an investigation. Since you'll need to ask the wrestlers confidential questions, you give them mobile phones and send them text messages. Unfortunately, the big guys' fingers are too large for them to text you back.

If you're the Japan Sumo Association, according to Japanese news agency Jiji, you buy iPads and distribute them to all 51 sumo stables for the purpose of getting the mostly computer-illiterate stablemasters and big-fingered wrestlers to communicate to you immediately. The association announced Monday that they've purchased 60 iPads already, which start in Japan at about 48,800 yen ($570).

There's no word on whether a new form of mawashi, the traditional silk belt worn by sumo wrestlers during training and competition, will be developed to let the wrestlers carry their iPads with them wherever they go -- but we can dream.

In this article: iPad, sumo
All products recommended by Engadget are selected by our editorial team, independent of our parent company. Some of our stories include affiliate links. If you buy something through one of these links, we may earn an affiliate commission.
Share
Tweet
Share