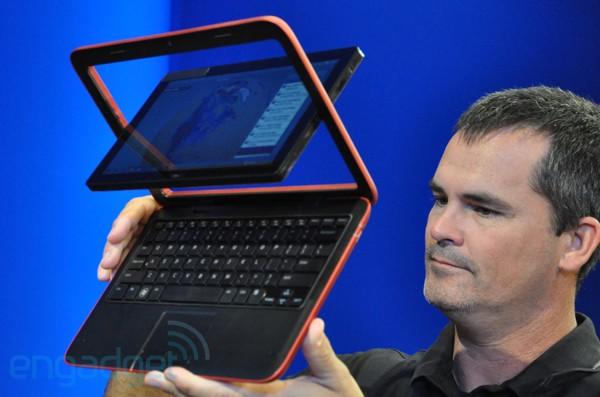 Boy, did Dell show just off the craziest device on stage at Intel's IDF 2010 day two keynote. What started as a tablet device converted to a netbook just by opening to the keyboard and literally swiveling the screen from within the frame. This hybrid's got a 10-inch screen, houses a dual-core Atom N550 and runs Windows 7 Premium. And if it looks at all familiar, that's because we saw something eerily similar in a leak from April (hello, Sparta). No price given and Dell isn't providing us any more details, but it should be released by the end of this year.

Update: It ain't pretty, but we managed to bum rush the stage and get some footage of the Inspiron Duo during as it made its transformations to and from a keyboard-equipped existence. It's after the break... along with a press photo!

Update 2: And now we've got a much clearer video for your enjoyment. Check it out!

Update 3: Dell sent over a pretty hefty press photo, so we decided to break it down piece-by-piece. To the gallery! In this article: atom, atom n550, AtomN550, breaking news, BreakingNews, dell, duo, idf 2010, Idf2010, inspiron, inspiron duo, InspironDuo, intel, intel atom, intel atom n550, IntelAtom, IntelAtomN550, n550, video, windows, windows 7, windows 7 premium, Windows7, Windows7Premium
All products recommended by Engadget are selected by our editorial team, independent of our parent company. Some of our stories include affiliate links. If you buy something through one of these links, we may earn an affiliate commission.
Share
Tweet
Share