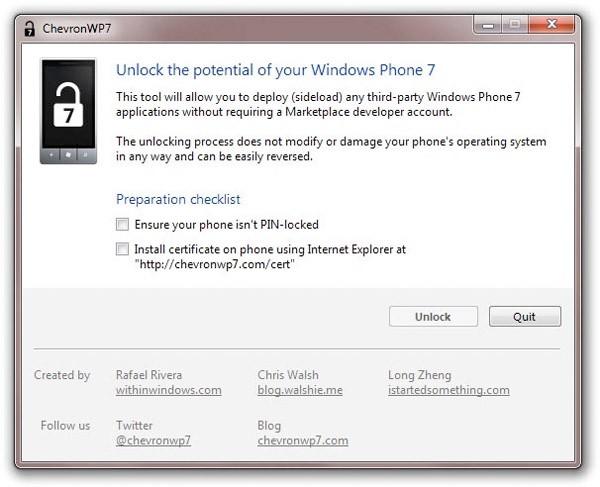 Hot on the heels of the release of a utility for bypassing the Windows Marketplace and sideloading your own apps, Microsoft has released a brief statement on the state of the Windows Phone 7 hacking community... and we wouldn't exactly say they're too worked up about it:

"We anticipated that people would attempt to unlock the phones and explore the underlying operating system. We encourage people to use their Windows Phone as supplied by the manufacturer to ensure the best possible user experience. Attempting to unlock a device could void the warranty, disable phone functionality, interrupt access to Windows Phone 7 services or render the phone permanently unusable."

So yeah, we'd say this is more or less a boilerplate quote: "we figured you'd hack this thing, we'd prefer it if you didn't, and here's a laundry list of things that could (but probably won't) happen if you fail to heed our meek warning." Over the long term, we wouldn't be surprised if Redmond ended up playing an Apple-style cat-and-mouse game with these folks, breaking hacks with firmware updates only to have them re-hacked within a few days' time. Considering the lack of spitfire in the statement here, we don't see them coming down too hard unless legitimate, card-carrying, fee-paying developers throw a fit -- and granted, ChevronWP7 could be a step on the road to piracy, so that could very well happen.
In this article: chevronwp7, jailbreak, microsoft, sideloading, unlock, windows phone 7, WindowsPhone7, wp7
All products recommended by Engadget are selected by our editorial team, independent of our parent company. Some of our stories include affiliate links. If you buy something through one of these links, we may earn an affiliate commission.
Share
Tweet
Share