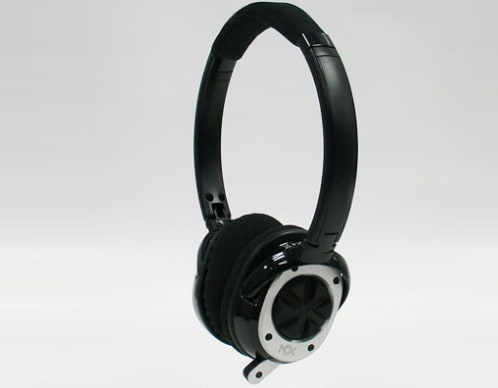 For the debut of their company Nox Audio, some creative headphone designers went all-out, crafting a feature-packed folding headset ready to rock PC chat, console gaming and even iPhone use. Priced at $80, the Specialist isn't going to do all that without some compromises, of course -- join us after the break to find out which uses these cans were best suited for. Be the first to review the Specialist?
Your ratings help us make the buyer’s guide better for everyone.
Write a review

Ergonomically speaking, we love the design, as those six-pointed discs on either side aren't just for show -- the right dials up and down volume, and the left reels in the integrated mic. The latter is flexible and stays where you put it, and there's a mute switch on the right side. From a distance the Specialist is certainly a stylish little number, too, with brushed aluminum look-alike trim surrounding glossy black earpieces that give off something of a Bose Quiet Comfort vibe. Upon closer inspection, the plastic's a little creaky, and the arms and hinges in particular feel cheap. Once open and adjusted, though, the headset's fairly comfortable, with cushions made of soft memory foam.

The highlight of the Specialist is most certainly connectivity, as few cans can claim to interface with such a wide range of devices, but actually getting the headset hooked up can be a little tricky. It ships with a MicroUSB cable that turns into a 3.5mm four-pole, which means you also need to use a (included) Y-adapter to attach it to your PC, though you can plug it right into an iPhone. With the Negotiator kit that comes in the $100 bundle, you can also connect to Xbox 360 and PS3, but it's a chore to get set up -- we had to daisy-chain three different cables and a USB dongle to have a working headset for Xbox 360. The Negotiator notably pumps in audio from the console as well as voice chat, and lets you mix the two on the fly as well, but we're not sure if being tethered to a mess of wiring is worth the freedom from speakers -- only witching-hour gamers rooming with light sleepers need apply.

For all its versatility, we have to admit, the Specialist's audio quality is sub-par. Muddy mids paired with somewhat shrill highs annoyed us throughout testing, and stereo separation was iffy as well. Compared to the similarly priced Grado SR-60 supra-aural phones, the Specialist was a bit of a joke, and even tested against some old clip-on Sony Q22s ($20) the Specialist failed to produce better sound. The integrated mic was excellent, however, for a headset of this class -- though it didn't lend anything extra to Xbox 360 chat, PC recordings were surprisingly clear, as were our iPhone calls.

We've always wanted a Swiss Army headset we could happily use for any audio purpose, but Nox didn't quite manage that here. At $80 it's reasonable if your prime purpose is gaming, but otherwise you can definitely do better. We congratulate the company on some great ideas in its debut product, and hope that next time we'll find quality alongside all the nifty little features.

In this article: headphones, headset, Nox, Nox Audio, Nox Audio Specialist, NoxAudio, NoxAudioSpecialist, PS3, review, Specialist, Xbox 360, Xbox360
All products recommended by Engadget are selected by our editorial team, independent of our parent company. Some of our stories include affiliate links. If you buy something through one of these links, we may earn an affiliate commission.
Share
Tweet
Share
Save