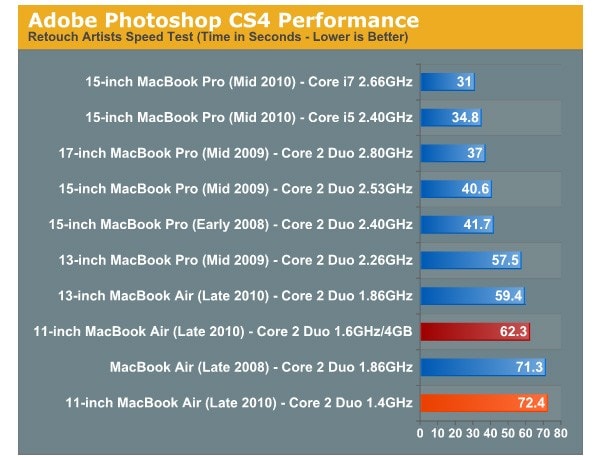 Apple's new MacBook Airs aren't exactly performance kings -- if anything, they're performance laggards given the finely aged internals they have -- but there is some room for upgrading them should you wish for a little extra oomph. AnandTech cornered the maxed-out 11.6-inch variant, with a 1.6GHz Core 2 Duo CPU, 4GB of DDR3 RAM, and 128GB of flash storage on board, and put it through the usual benchmark routine. In spite of costing a much meatier $1,399 than the $999 default config, the upgraded Air was deemed to be a worthwhile improvement as it delivered an average of 15 percent better performance at the cost of no more than seven percent of battery endurance. To our eyes, the biggest driver for these improved results was the jump from 2GB to 4GB of RAM, something all of us can bear in mind when contemplating our next laptop purchase.
Source: AnandTech
In this article: 11-inch, apple, laptop, macbook, macbook air, macbook air 11.6, macbook air 2010, MacbookAir, MacbookAir11.6, MacbookAir2010, review, reviewed, thin and light, ThinAndLight, ultraportable, ultrathin
All products recommended by Engadget are selected by our editorial team, independent of our parent company. Some of our stories include affiliate links. If you buy something through one of these links, we may earn an affiliate commission.
Share
Tweet
Share
Save