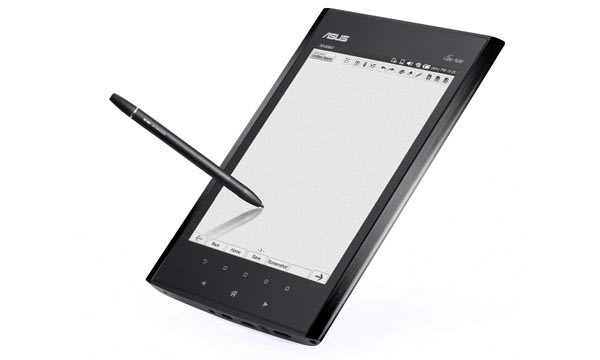 Remember how confusing it was back in May when ASUS introduced a bunch of tablets it called Pads and a sort of digital notepad it called a Tablet? At least some of that messy naming scheme has now been rectified thanks to the merciful renaming of the Eee Tablet to the new Eee Note EA800 moniker. It's still the same 8-inch (768 x 1024) monochrome display, offering 64 levels of gray and 256 levels of pressure sensitivity, backed by 4GB of integrated storage, a 2 megapixel camera, voice recorder, and built-in stylus silo. WiFi is of course a given, and there's a microSD slot and a 3700mAh battery somewhere inside that matte black shell as well. If things do go to plan this time, we should be seeing plenty more of the Eee Note at January's CES. We're penciling it in already.