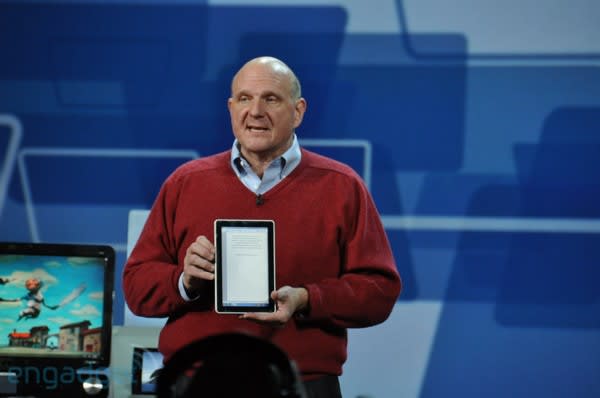 The CES 2010 Ballmernote has become something of a black mark for Microsoft -- the company's delivered almost nothing in the year after Steve demoed the HP Slate and talked about future Windows 7 Slate PCs -- but as one would assume, Redmond's expected to pick up right where it left off in just a few weeks at CES 2011. According to the New York Times, Microsoft's prepping to explain how it will target the iPad with the help of a number of partners, including Samsung and Dell. While the article is quite vague, it looks like the keynote will include a few new tablet demos, including one of a new Samsung device that sports a "slick" slide out keyboard -- we'd put money on that being the 10.1-inch Gloria. The Times says the Samsung tablet (not to be confused with the Samsung Galaxy Tab) will run some sort of software layer when "the keyboard is hiding and the device is held in portrait mode," but Microsoft's is also reportedly eschewing a central app store for native tablet apps and instead encouraging software companies to build HTML5 -based web apps. That certainly sounds a lot Google's Chrome strategy (and a strategy that could backfire since HTML5 apps will work on Chrome OS devices and iPad equally well), but the Times' source didn't know if these "apps" would be ready for CES as they are "still in production."

As far as we can tell, a lot of this is still built upon Windows 7, but it's also rumored that the Redmond gang will tease Windows 8 on stage -- something that sounds extremely plausible to us, since we've heard from numerous sources that Microsoft's real tablet strategy will rely on Windows 8 and a new all-touch interface that the company has been working incredibly hard on. While Windows 8 isn't due out until the later half of 2011 / early 2012, Ballmer would do well to use his CES time to tell us about Microsoft's "riskiest" product bet and finally do something to address Microsoft's notable absence from the modern tablet market. Of course, nothing's for sure, except for the fact that we'll be there, providing live coverage of the entire thing.

Update: We've been thinking about it (as well as keeping an ear on our chatty Tweeps) and there's also a chance that Microsoft could show off its own Windows 7 software layer for tablets. Either way, we're hoping to get some major answers.
Source: New York Times
In this article: CES, CES 2011, Ces2011, dell, Gloria, intel atom, Intel oak trail, IntelAtom, IntelOakTrail, Microsoft, Oak Trail, OakTrail, samsung, samsung gloria, SamsungGloria, slates, Steve Ballmer, SteveBallmer, tablets, windows 7, Windows 8, Windows7, Windows8
All products recommended by Engadget are selected by our editorial team, independent of our parent company. Some of our stories include affiliate links. If you buy something through one of these links, we may earn an affiliate commission.