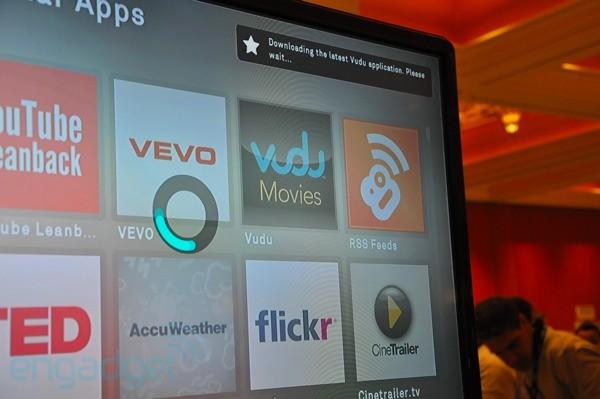 Boxee is here at CES showing off two unreleased products to eager Boxee fans and novices alike. We were sufficiently bummed when both Netflix and Vudu were delayed for the box, but we can report that they're definitely getting close to primetime. The Vudu app we saw was incredibly polished, quick, and had nice video quality even on the overcongested and questionable internet connection. It actually does a network test the first time you launch the app, but after that you can manually select to watch each program in either SD or HD. Unfortunately we weren't allowed to see the Netflix app in action because "Netflix would not be happy with us" according to Boxee chief and Engadget Show alum Avner Ronen. (It wasn't even loaded on the demo box -- we promise we looked). Head past the break for deets on the iPad app, as well as shots of it in action. Additionally, Boxee was showing off its iPad app as well, and we're not exactly sure we quite get what they're trying to accomplish. Due to the iPad's lack of Flash, it only does YouTube and other HTML5 content, so many of our favorite apps were off the table. It doesn't even have support to act as a remote for your Boxee box -- which completely boggles our minds considering how excellent the iPhone remote app is. We're told that's in the pipeline, but it probably won't make it to the 1.0 release. On the plus side, you can stream content from any computer on your network set up as a Boxee server, which could mean trouble for dedicated apps that do this like AirPlayer and StreamToMe. Still, all content viewable on the iPad can be streamed directly to your Boxee Box with just one click on a button that looks oddly similar to the one for Apple's AirPlay. No word on release date for the iPad app (or whether it'll be free or not), but feast your eyes on the shots we've compiled in the gallery below. 7
In this article: boxee, boxee box, BoxeeBox, ces, ces 2011, Ces2011, hands-on, ipad, netflix, vudu
All products recommended by Engadget are selected by our editorial team, independent of our parent company. Some of our stories include affiliate links. If you buy something through one of these links, we may earn an affiliate commission.
Share
Tweet
Share