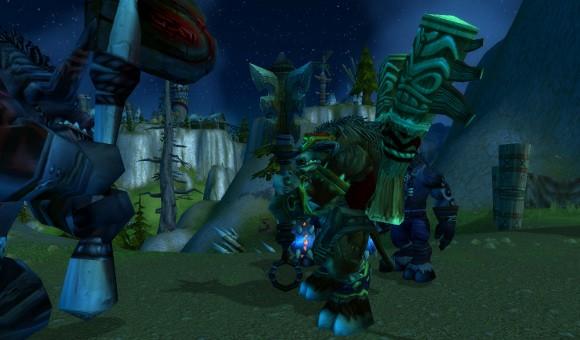 The son is not the father, but the son does not try to be. Baine, son of Cairne, now leads the tauren of Mulgore from Thunder Bluff. While we take no praise away from the old bull, now is the time to acknowledge the new, to celebrate the spirit and strength of Baine. Growing to adulthood in the shadow of so great a figure, Baine has grown from a callow youth to a steady leader and finally to the shu'halo who planned and executed the deliverance of his people from Magatha and her Grimtotem.

It was Baine who defeated the rebel tribe of Grimtotems and yet showed mercy when his father's ultimate murderer came under his judgment. It was Baine who chose to forgo revenge for Garrosh Hellscream's role in his people's loss, in his own bereavement. He could have challenged Garrosh, and without any elder crones to poison the orc warchief's weapon, he most likely could have crushed Hellscream under his furious hooves. He chose not to. He chose his people's benefit, and the benefit of the Horde they are the heart and soul of, over the vengeance he could have sought. He chose others over himself.

Baine Bloodhoof learned his lessons at his father's side, yes. But do not take away from him his stepping out from such a great shadow. It was Baine who in the hour of greatest need stepped forth into An'she's light, saved his people, saved his father's dream, and preserved bonds of fellowship that would not have been hard to tear asunder.

Let us celebrate the life of Baine of the Bloodhoof tauren.

A sapling in the shadow of a grand oak

In his early days Baine, while a mighty tauren and a fine son, a source of pride for his father and a brave warrior for his people the shu'halo, suffered from recklessness. The Bloodhoof were driven from their ancestral lands in The Barrens and driven up and down the coasts of Kalimdor, doing battle against the centaurs in what today is known as Durotar. Even after the shu'halo made contact with the orcs under Thrall's leadership and made common cause with them in order to secure a new home in the grasslands of Mulgore, Baine suffered from pride and a desire for battle. His recklessness would become a burden upon his father, for Baine was captured by the centaur raiding his people, and he and many of his fellow tauren were held prisoner.

Eventually, Rexxar, champion of the Horde and Mok'Nathal half-ogre, came to recruit the tauren to aid the orcs and trolls against the humans of Kul'Tiras led by Admiral Daelin Proudmoore. Finding Cairne despondent at the loss of his son (Cairne going so far as to tell Rexxar to take Thrall the news that he was dead alongside his son), Rexxar took the advice of Tagar, a highly placed tauren warrior. Rexxar found Baine, and together, the two of them fought their way out of the centaur encampment and back to Cairne, who was so overjoyed at the sight of his son alive that he immediately threw off his old depression and helped Rexxar in his bid to defeat Proudmoore.

If Baine resented his rescue, he did not show it. As the years passed, he settled into a leadership role among his people, taking charge of the Bloodhoof Village of his tribe in the heartlands of Mulgore. As a leader, Baine took action against the nearby Palemane tribe of gnolls, investigated the Venture Company's presence in Mulgore, and attempted to scare off dwarven prospectors from the Explorer's League, who failed to understand or heed his warnings about their actions and how they were upsetting the local spirits of the earth. (These dwarves would eventually die at the hands of the elemental spirits for failing to heed Baine's warnings.)

As time passed and Cairne was more and more called upon to mediate between the various leaders of the Horde, the old bull was forced to spend more time away from Thunder Bluff, and Baine led in his absence. Acting in his father's stead gave Baine a chance to observe Magatha Grimtotem for himself and come to distrust her as his father did. Still, even when the denizens of the Emerald Nightmare overwhelmed their station and attacked the mortal world, Baine saw no signs of overt treachery from her.

Reaching for the sky

Then again, he was busy. For it was Baine who stood first among the warriors of the Horde in the great army of those mortal dreamers who had evaded the effects of the Nightmare. As a result, Baine actually fought alongside Varian Wrynn, and if they never became friendly, they worked together effectively. Baine, in fact, simply by his presence and unquestioned prowess, managed to quiet any dissent about following the human king into battle from the ranks of the Horde.

So it was that as the Lich King died in Northrend and Cairne traveled north to bring Garrosh Hellscream home to Durotar, Baine stood as a prince among shu'halo. Seasoned by his experiences, the young bull found himself more and more standing alongside his father as an advisor and right hand, leaned on for his dependable strength. It would come to pass that he soon would need that strength.

Baine was back at Bloodhoof Village attending to his usual duties when a shaman of the Grimtotem came to him with dire news. His father had challenged Garrosh Hellscream to a Mak'gora, and unaware to either of those fighting in it, Magatha had taken the opportunity to poison Hellscream's weapon and cause Cairne to die. This shaman, Jevan of the Grimtotem (known as Stormsong, due to his affinity with water and air elementals), had not agreed with Cairne's policies but had respected him and could not allow treachery such as that Magatha was now attempting to succeed. Going against his elder crone and indeed his very tribe, Jevan warned Baine of the Grimtotem treachery and helped him use a stampede to escape Grimtotem assassins. Thunder Bluff fell under Grimtotem control, but Baine still lived, leaving Magatha unsure of her position at the crucial time.

Stepping into the light

With Garrosh potentially supporting the Grimtotem as far as Baine knew at the time, he and his advisers Hamuul Runetotem and Stormsong eventually rejected the idea of approach other Horde factions for aid as either being too distant, too few, or too potentially unlikely to help. In the end, Baine went to Jaina Proudmoore of Theramore for aid. In so doing, the de facto prince of the shu'halo met Anduin Wrynn, son of Varian, and in so doing, started at first a wary detente that became a kind of friendship sparked by their mutual understanding of the burden of living up to a father of great presence and reputation. Anduin went so far as to give Baine the mace Fearbreaker, formerly held by Magni Bronzebeard, and Jaina pledged money that Baine used wisely. It's telling that alone of all those involved, only Anduin understood that Baine didn't fear death but rather feared being unable to do what he believed his father would have wanted. Anduin gave him Fearbreaker, not to help him conquer his fears but rather to show him he had already done so.

To lead his people

A plan concocted by Baine and his allies was soon put together and executed, no little thanks due to Gazlowe of Ratchet, who provided material support due in part to his respect for Cairne (although he still took the money -- but then again, Gazlowe is a goblin), and even due to Eitrigg of Orgrimmar's browbeating of Garrosh Hellscream. Zeppelins, explosives, and a force of tauren from various loyal tribes who were warned about Magatha and her treachery, as well as other Horde soldiers at his command, Baine unleashed his counterinvasion of Thunder Bluff. Despite the war prowess of the Grimtotem and Magatha's powerful shamanism, in the end, Thunder Bluff was reclaimed and Baine struck down his father's murderer, but he deliberately did not take her life. Displaying the mercy and wisdom he had made his own, Baine allowed those Grimtotem who forswore her treachery to remain and banished the rest alongside Magatha on penalty of death.

Baine then confronted Garrosh Hellscream himself, and although he could have chosen to challenge Garrosh as his father had, he instead made sure that the warchief understood that the leader of the tauren people was not going to take an action that might divide the Horde further. He openly admitted his anger towards Hellscream for his role in his father's death but said that the time was not right, and he acknowledged Garrosh as Horde warchief. In so doing, he displayed that he was above petty concerns. In so doing, Baine may well have saved the Horde.

Now Baine leads his people from Thunder Bluff, having driven out Orno Grimtotem and the last of the Grimtotem who supported Magatha and her plans, in the process again displaying his resolve and raw power.

Baine Bloodhoof - War Dance
Some see our people as gentle giants, or noble savages. They have never seen us fight against our own kind...against betrayers from within. The Grimtotem were offered mercy in exile, and they have scarred their own home to spite us. They will no longer be tolerated in Mulgore. I've already sent our warriors ahead to drive them out through Stonetalon Pass, to the north. You have fought bravely against the Grimtotem; I ask that you join the battle again. Go, and help deal this final blow.

source
Let none forget the shu'halo do not possess infinite patience, and for those who have offered insult (as the Grimtotem have), eventually, a response will come. Baine Bloodhoof has shown he is capable of great compassion, great mercy, and great tolerance, just as his father might have asked. He has also shown himself to be the hammer that crushes the recalcitrant. Do not assume his gentle hand cannot curl into a powerful fist. You will be briefly surprised if you do.

Then you will be dead.

All hail Baine, son of Cairne, chief of the Bloodhoof Tauren. All hail he who battled the nightmare, who led his people through their greatest loss. All hail the liberator of Mulgore, who recaptured Thunder Bluff and dispenses justice in equal measure with mercy to his enemies. All hail the favored son not only of his father but of the Earthmother and of the shu'halo entire.

While you don't need to have played the previous Warcraft games to enjoy World of Warcraft, a little history goes a long way toward making the game a lot more fun. Dig into even more of the lore and history behind the World of Warcraft in WoW Insider's Guide to Warcraft Lore.
In this article: Baine, Bloodhoof, Cairne, featured, Grimtotem, guide, guide-to-lore, Hellscream, Jevan, lore, lore-guide, Magatha, role-play, role-playing-guide, rp-guide, Runetotem, Thunderhorn, world-of-warcraft-lore, wow-guide, wow-lore, wow-role-playing, wow-role-playing-guide, wow-rp, wow-rp-guide, wow-rping
All products recommended by Engadget are selected by our editorial team, independent of our parent company. Some of our stories include affiliate links. If you buy something through one of these links, we may earn an affiliate commission.
Share
Tweet
Share