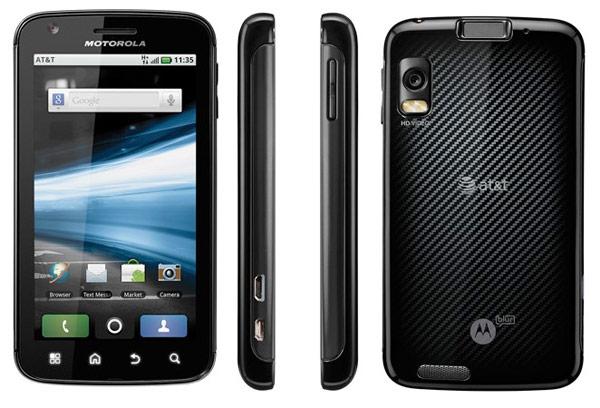 Don't ever say Ma Bell lacks cahones. On the same day that existing Verizon customers began pre-ordering the CDMA'd iPhone 4, AT&T has come clean with what's next on America's largest GSM network. While announced at CES 2011, pricing and release information had eluded the luscious Atrix 4G... until now, that is. AT&T will begin pre-sales for the Froyo-powered Motorola Atrix 4G Android superphone on February 13th, with the standard $199.99 + two-year contract ($50 more than we were led to believe, mind you) getting one into your grubby mitts. We're told to expect general availability on March 6th "or earlier," putting it just about in line with the date we'd heard rumored. Moreover, those looking to buy will should have a difficult time laying off of the Laptop Dock bundle, which nets you an Atrix 4G as well as a $499.99 dock for the grand total of $499.99 on contract. You heard right -- those who opt to buy the dock at a later time will be asked to shell out five Benjamins, whereas that same tally on day one will also include the phone. It should be noted, however, that the bundle only applies if you also sign your name to a Data Pro plan and tethering add-on, so be sure you're down for that monthly hit before committing in haste. Oh, and just in case you simply can't stop spending, the carrier is also offering an Entertainment Access Kit for Atrix 4G customers which includes the Motorola HD Multimedia Dock, a Bluetooth keyboard and mouse, and a remote control for $189.99.
Show full PR text

AT&T Announces the World's Most Powerful Smartphone, the Motorola ATRIX 4G, Will Be Available for Preorder on Feb. 13

Unique line of Accessories, Including the Motorola Laptop Dock, Available with Bundled Pricing

AT&T is the leader in smartphones, and expects to widen that lead in 2011. In January, AT&T committed to an industry-leading Android portfolio in the U.S. in 2011 and said it plans to offer two 4G smartphones in the first quarter. An industry first, the Motorola ATRIX 4G is the leading edge of more than 20 advanced, 4G devices AT&T plans to deliver in 2011. AT&T has completed the deployment of HSPA+ to virtually 100 percent of its mobile broadband network, which enables 4G speeds when combined with enhanced backhaul.

The Motorola ATRIX™ 4G Android 2.2 smartphone will be offered exclusively by AT&T and is the world's most powerful smartphone. Featuring a 2x1 GHz dual-core processor for a total of 2 GHz of processing power, a unique webtop application, the world's first qHD display, and Adobe flash player, the, ATRIX 4G delivers a remarkable combination of application processing power with 4G speed capability and a high-resolution qHD display, a first for the industry.

It will be complemented by breakthrough accessories that include a revolutionary, super-thin Motorola Laptop Dock -- for which ATRIX 4G is the "engine" -- and the Motorola HD Multimedia Dock that uses ATRIX 4G's HDMI video output capabilities and processing power to enable a revolutionary browsing, application and media experience.

AT&T will offer two special packages for customers who choose to purchase ATRIX 4G in addition to these unique accessories. The first combines ATRIX 4G and the Motorola Laptop Dock for a promotional price of $499.99 after a two-year service contract and $100 mail-in-rebate after subscription to Data Pro smartphone data plan and tethering add on. Customers who choose to purchase the Motorola Laptop Dock separately pay $499.99. AT&T is also offering an Entertainment Access Kit for ATRIX customers which includes the Motorola HD Multimedia Dock, a Bluetooth® keyboard and mouse, and a remote control for $189.99.

AT&T U-verse® TV customers will be able to manage their DVR recordings - and U-verse customers with a qualifying TV plan can download and watch hit TV shows – right from their ATRIX 4G handset using the U-verse Mobile application. In addition, any ATRIX 4G user, whether or not they have U-verse TV at home, can still enjoy a variety of video options - including live TV - with the new U-verse Live TV application, preloaded and available for $9.99 a month.