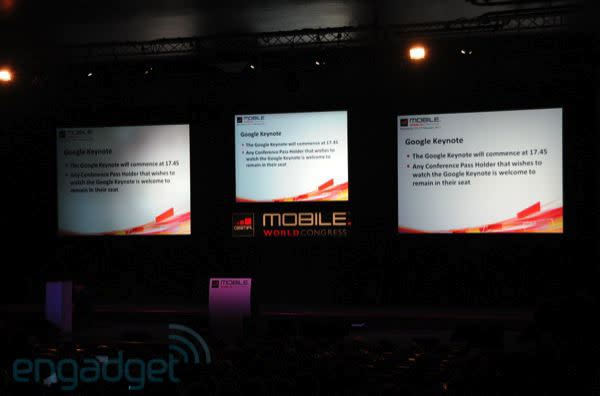 Ballmer and Elop were quite the pair during the Microsoft keynote yesterday, so let's say the bar's been set pretty high for Eric Schmidt. But that's fine, the now-former CEO of Google has a knack for lively (if not downright controversial at times) speeches. This is the first time we've seen him talk since he stepped away from Babysitter (his words) to Executive Chairman, and the Android of today is a few flavors improved from the 2.1 Eclair that had launched a little before his MWC 2010 keynote -- so needless to say, we're excited for what he has to say today. We'll be reporting live from Fira, so stay tuned -- the fun should start around 11:45AM ET!

In this article: 2.2, 2.3, 2.4, 3.0, android, eric, eric schmidt, EricSchmidt, froyo, gingerbread, google, google android, GoogleAndroid, honeycomb, liveblog, mobile world congress, mobile world congress 2011, MobileWorldCongress, MobileWorldCongress2011, mwc, mwc 2011, Mwc2011, schmidt
All products recommended by Engadget are selected by our editorial team, independent of our parent company. Some of our stories include affiliate links. If you buy something through one of these links, we may earn an affiliate commission.
Share
Tweet
Share