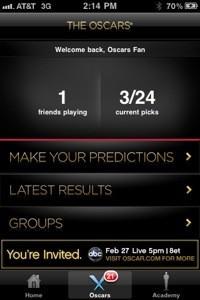 With the Academy of Motion Pictures Arts and Sciences 83rd Annual Academy Awards (or as we like to call them: The Oscars) airing this Sunday on ABC, iOS-using movie fans may want to enhance their viewing experience with a few Apps for their iPhone, iPad or iPod Touch.

So, we've put together a little list of some that might help you out, with descriptions from the App developers themselves and some context from us.

First off, if you're interested in the fashion and glamour of the Oscars as well as who wins what award (and we know you are), you'll need Live from the Red Carpet. This app "...lets you experience total VIP access to Hollywood's hottest events, right at your fingertips."

"You'll have instant access to hundreds of E! articles, breaking down everything from the winners and upsets to the shows' best (and worst) moments. Plus, connect with Twitter to share your VIP access with the world."

This App is pretty useful, especially if you're that person who always wants to know what everyone is wearing. Also, its a great way to keep up on that all-important celeb gossip and party info so even if you can't really be there, you can at least feel like it for a bit.

Next up is an App that no certified cinefile can be without: IMDB (AKA The Internet Movie Database). With this App you have instant access to the entire online database of movie knowledge. Do you want to know which movie from 2001 starred Colin Firth and Hugh Grant? It's in there. How about what movie won Best Picture in 1977? It's in there.

Or, how about what was director David Fincher's first movie? In there. All the information you could ever want about every actor, actress, movie, director or writer (well, who cares about the writers really?) is in the IMDB database. It's an essential tool in any Oscar watcher's aresenal.

Moving on, we've got an App from the folks bringing us the Oscar telecast, ABC Digital. This App, called Oscar Backstage Pass, gives fans "access to live streams from exclusive cameras placed throughout the Red Carpet, the Kodak Theatre and the Governors Ball so you can go beyond the tv broadcast and watch more live Oscar action as it's taking place."

That sounds like fun, right? Who knows, maybe one of those cameras will catch someone doing something they shouldn't. Or better yet, a fight.

Finally, you can download the "official" Oscars App which, among other things, lets you "make Oscar predictions, access complete Nominee lists, get insider information on each film, watch viewable trailers and more." You can also "compare with your group of friends and share your picks through Facebook, Twitter, text and email."

We've got our predictions ready, how about you?

The Oscars air on Sunday at 8E/5P on ABC.

In this article: Academy Awards, AcademyAwards, features, iOS 4, ipad, iPhone, Movies, Oscar Backstage Pass, OscarBackstagePass, Oscars
All products recommended by Engadget are selected by our editorial team, independent of our parent company. Some of our stories include affiliate links. If you buy something through one of these links, we may earn an affiliate commission.
Share
Tweet
Share