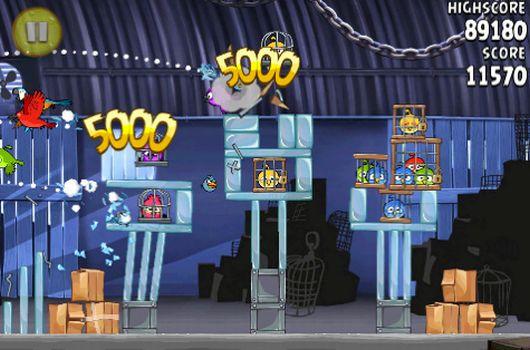 The movie tie-in game for Angry Birds, called Angry Birds Rio, is now available on the iOS App Store for 99 cents on iPhone and $2.99 on the iPad; it's $4.99 on the Mac App Store. The game features 60 new levels of the popular bird-throwing game and stars two characters from the upcoming movie Rio. It features full Game Center integration with all new achievements and boasts "a spectacular boss fight" of some kind. In short, if you like Angry Birds, you'll enjoy this one as well.

The game unfortunately does contain those ads that had some feathers ruffled in the original version, but the ratings on iTunes haven't suffered very much. And the description on the iOS store does promise updates "throughout 2011," so there's more content to come.

In case you don't want to spend the buck just yet, there are also free versions for both platforms that have six levels to check out. But it's Angry Birds -- while it looks from the screenshot like you're busting birds out of cages rather than attacking pigs, the catapult physics gameplay is still the main focus.

In this article: angry birds, angry birds rio, AngryBirds, AngryBirdsRio, app store, AppStore, ios, iOS 4, ipad, iphone, Mac, mac app store, MacAppStore, movie, tie-in
All products recommended by Engadget are selected by our editorial team, independent of our parent company. Some of our stories include affiliate links. If you buy something through one of these links, we may earn an affiliate commission.
Share
Tweet
Share