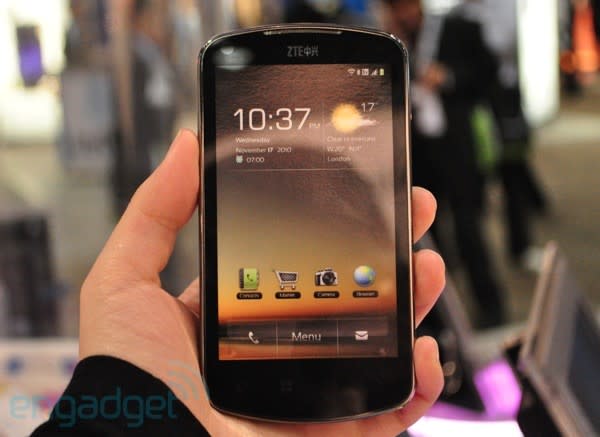 We've long covered ZTE products at Engadget, but hardly ever do we see the company's phones touch down on a US carrier. Well, that's all going to change very soon. While the Chinese company isn't sharing exact carrier partnerships, it did reveal that its new Style S and LTE tablet will be coming stateside in the second half of 2011. The first of those two is that 4.3-inch Android 2.3 handset up there. Unfortunately, the Style on display at ZTE's booth was just a mockup, but we're certainly digging the large screen and soft back of the device. According to the placard, it will have dual cameras (a .3 megapixel shooter on the front and a 5 megapixel cam around back) and a 1350mAH battery. That aforementioned LTE tablet was also on display on the showfloor, albeit behind glass. The Honeycomb slab, which we hear will be aggressively marketed, has a 1280x800-resolution 10-inch display, two cameras, a 6800mAH battery, and an 1.2GHz processor. Unfortunately, that's all we've got for now, but check out the gallery below and expect to hear more during the second half of the year.

22
In this article: Android 2.3, Android2.3, ctia wireless 2011, CtiaWireless2011, hands-on, LTE, LTE tablet, LteTablet, Style S, StyleS, tablet, US, zte, ZTE LTE tablet, ZTE Style S, ZteLteTablet, ZteStyleS
All products recommended by Engadget are selected by our editorial team, independent of our parent company. Some of our stories include affiliate links. If you buy something through one of these links, we may earn an affiliate commission.
Share
Tweet
Share