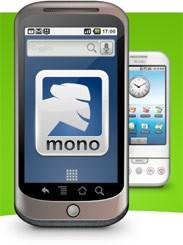 If app developers have a pattern of going after the iPhone first and Android second, well, the same is apparently true of the folks who write software for the code monkeys. Novell just announced Mono for Android, the first set of tools that lets devs write .NET and C# apps for Android phones and tablets. Novell already lets developers do the same for Linux, iOS, and Mac OS X and, as always, lets coders continue to use Microsoft Visual Studio 2010 to write applications -- if that's the testing software they're used to. In addition to the Visual Studio plug-in, you get bindings for native Android APIs and the core Mono runtime. It's available now, starting at $99 for students (minus the ability to, you know, send finished apps to Android Market) and $399 for everybody else. Already developing for the iPhone? Prove that you own MonoTouch (essentially, the same Novell product for iOS devices) and get 50 percent off an Android tool kit.

Novell today announced the availability of Mono® for Android, the first solution for developing Microsoft* .NET applications for the Android* platform using Microsoft Visual Studio*. With the addition of Mono for Android to its existing Mono development tools, Novell is enabling Microsoft .NET and C# developers using Visual Studio and other environments to utilize a common code base to easily create applications for the industry's most widely-used mobile devices, including Android-based smartphones and tablets, Apple iPad*, Apple iPhone* and Apple iPod* Touch.

According to statistics released by research firm Nielson, Android has a 29 percent consumer market share, making it the most popular smartphone platform. With Mono for Android, .NET developers and independent software vendors (ISVs) can utilize Visual Studio and their existing skills to build a vast array of Android-based applications and sell their products into this massive market.

"Since the introduction of MonoTouch in 2009, developers have experienced how Mono streamlines mobile application development," said Miguel de Icaza, Mono project founder and vice president of Developer Platforms at Novell. "As a result, many asked us to build a similar tool for Android. We developed Mono for Android to give both individual developers and businesses a way of sharing their code across multiple mobile platforms, increasing efficiency and reuse of their C# and .NET expertise across the board."

Mono for Android consists of the core Mono runtime, bindings for native Android APIs, a Visual Studio 2010 plugin to develop Android applications, and a software development kit that contains all the tools needed to build, debug and deploy applications. Developers trained in Microsoft Visual Studio can stay within their preferred IDE, while using their existing skills and .NET code, libraries and tools, as well as C# programming knowledge, to create mobile applications for Android-based devices. With the Visual Studio 2010 plugin, engineers can develop, debug and deploy their applications to an Android simulator, an Android device or the Android Application Store.

Mono for Android complements MonoTouch, Novell's popular solution for developing applications for the iPad, iPhone and iPod Touch. Developers utilizing Mono for Android and MonoTouch can save time and money by sharing common code between iPhone, iPad, iPod Touch and Android phones and tablets, as well as Windows Phone 7, Windows desktops and Windows Server. A Mono for Android add-in also allows MonoDevelop users to develop on OS X.

"As a mobile software developer and middleware vendor, Resco customers are enabled to use our products to develop MonoTouch, and now Mono for Android applications for Android and Apple devices," said Michal Sartoris, senior developer at Resco. "With more than 3,000 customers, our business success depends on us delivering feature-rich, highly-quality applications to the market before our competitors. Novell is providing us with innovative, cross-platform development tools that enable us to reduce the cost and resources required to create mobile applications."

For more information about Mono for Android, visit http://mono-android.net. To learn more about the Mono Project visit http://www.mono-project.com.

In this article: .NET, Android, android apps, AndroidApps, applications, apps, C, dev, development, Google Android, GoogleAndroid, microsoft, microsoft visual studio, microsoft visual studio 2010, MicrosoftVisualStudio, MicrosoftVisualStudio2010, Mono, novell, Novell Mono, Novell Mono for Android, NovellMono, NovellMonoForAndroid, sdk, smartphones, software, tablets
All products recommended by Engadget are selected by our editorial team, independent of our parent company. Some of our stories include affiliate links. If you buy something through one of these links, we may earn an affiliate commission.
Share
Tweet
Share