In this article: AMD, AMD Fusion, AMD Fusion E-350, AmdFusion, AmdFusionE-350, APU, Brazos, CR650, E350, Fusion APU, Fusion E-350, Fusion E350, FusionApu, FusionE-350, FusionE350, laptop, MSI, MSI CR650, MsiCr650, notebook, review, Zacate, Zacate E350, ZacateE350
It was a long time coming, but when it finally arrived, AMD's highly anticipated Fusion APU ripped through the laptop market like a bull on steroids. Just this month, the chipmaker announced that the platform made up nearly half its notebook shipments, and no doubt contributed heavily to its $1.61 billion in Q1 revenues. In the past four months, we've seen its superior integrated graphics working on a slew of smaller machines, but it seems Fusion wanted more.

Back in January, Toshiba announced that it would bring the E-240 APU to a 15.6-inch budget notebook, and just a few weeks later MSI followed suit with its own announcement, saying it planned to put a Zacate E-350 APU, incorporating Radeon HD 6310 graphics, in its CR650. We've spent some time with Lenovo's ThinkPad X120e and HP's Pavilion dm1z, both sporting 11.6-inch screens and E-350 APUs, but we've yet to experience the force of Fusion on a larger device. Naturally, when the opportunity presented itself, we jumped on the chance to find out how a big rig like the CR650 would stack up against its dainty predecessors. Will Fusion's wonder chip offer the same performance in a $500, 15.6-inch laptop? Or will it fail to bring its beastly force to a big budget machine? Hop on past the break to find out.
%Gallery-122608%
MSI
0
SCORE
Engadget
N/A
Critics
1 review
60
Users - Not yet scored
N/A 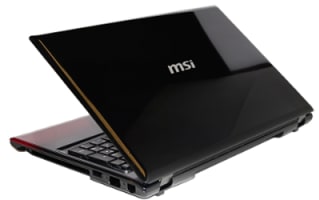 Right out of the lime green box, the CR650 comes across as a rather imposing machine. Weighing in at 5.3 pounds and measuring 15 x 9.8 x 1.4 inches, it's actually pretty standard compared to similarly appointed devices, but there's something deceiving about its proportions. Let's just say, in this case, black is not a slimming color. Unfortunately, MSI decided to couple this bulky design with a glossy coating -- a practice we've grown mighty tired of. It does have a subtle, sparkly grid pattern beneath that shiny coating, but with the finish as-is, an added layer of fingerprints can obscure the stylish touch. That pattern is continued on the interior, approaching the base of the island-style keyboard, adding a little extra flavor under the hood.

Speaking of hoods, this one's especially sticky -- the stiff hinges kept the screen propped up at any angle, but made it unnecessarily difficult to open. The big-boy body is flanked on either side by multiple points of connection: the right side features a DVD burner, USB, VGA, and Ethernet ports, and on the left side you'll find mic and headphone jacks, HDMI, two more USB ports, and a heat vent. An SD card reader can be found tucked discreetly beneath the front lip.

As we've come to expect from an MSI machine, the CR650 packs a perfectly suitable chiclet keyboard, but this one's got a few extra bells and whistles -- most of which we could do without. The keys themselves, which have a very slight curvature and a nice bounce, provide for comfortable typing most of the time. It was the positioning of those keys, however, that gave us some problems. We were happy to find a dedicated number pad, but since we don't do a whole lot of one-handed calculating, we would have been even happier if they'd used the extra space to spread things out. In particular, the right shift key is cut in about half, which caused us to miss our mark on a number of occasions. We found it took a couple of days to get used to the closeness, and even then, our typo count was way above average. Just above the keyboard sit a number of dedicated keys that offer shortcuts for battery settings, powering down, and accessing media files. While we're all for easy access, we would at least liked to have seen dedicated volume controls, instead of having them relegated to the arrow keys.

We found the textured touchpad made for easy multitouch control -- despite its comparatively small dimensions -- but hitting the mouse bar was another story. The black glossy strip is clearly distinguished from the rest of the touchpad, but the lack of separation between right and left controls proved a bit frustrating. What's more, the bar was just plain stiff. We ended up hitting the dedicated touchpad kill-switch (just above the pad itself) and plugged in a USB mouse. That was fine when we were at our desk, but we ended up cursing the thing when we took it out for a cup of coffee.

In terms of display, the 1366 x 768-resolution screen provided for pretty crisp viewing up close -- a 1080p trailer for Thor looked nice and sharp, in fact. We experienced slight color distortion when the screen was tilted anywhere beyond just a tick back, but it didn't prove all that distracting or surprising, for that matter. The CR650 did, however, deliver decent horizontal viewing angles: the colors were only a tad washed out when viewed from a seat away. As is the case with most glossy displays, the CR650's screen was prone to a decent amount of glare, but, again, it wasn't a deal-breaker. The real shocker here came by way of the two SRS-powered speakers flanking the dedicated buttons above the keyboard. We were pleasantly surprised by the sound quality when we fired up WoW: Cataclysm, and equally impressed with what they did with Esquivell's psychedelic lounge sounds. We could clearly make out the lyrics to Aqua de Beber from two rooms away when we cranked it up to full blast.

In the performance department, the CR650's 1.6GHz E-350 processor and 3GB of RAM fared pretty well against the other two Fusion rigs, but came up just a little short at the finish line. As you can see from the chart below, however, it didn't do so well when pitted against other laptops in its class. The CR650 pulled in 2315 on PCMarkVantage, falling 2469 behind the Intel Core i3 in Gateway's NV5933u, and even scored 372 less than the Intel Core 2 Duo in Dell's Vostro V13. None of this would have mattered if the CR650 lived up to the numbers, but after a week with us it was definitely the worse for wear. In fact, it became so herky jerky while running Skype, Notepad, Pidgin, and Firefox (with eight tabs open) simultaneously that we had to switch machines just to get a day's work done.


So, it failed to meet our workaday expectations, but we're not exactly easy on our machines, and Fusion's real appeal is in the graphics. As evidenced by the chart above, the CR650 beat out its netbook brethren by a small margin, schooled Intel's integrated HD graphics by about 500, and killed the GMA 4500MHD inside Dell's Vostro V13. But numbers are just numbers -- what really matters is how it performs in the real world. As far as picture quality is concerned, it handled 1080p video with ease and precision. We found it did become a bit stilted while streaming First Orbit from YouTube with other applications open, but it played uninterrupted when it only had Skype to contend with. Overall, it exceeded our expectations while playing high-res video -- it even made a low-res version of Raquel Welch Space Dance look good in full screen.

When we took a break for a little play, on the other hand, the CR650 proved its chops. We found our little gnome had a pretty smooth run through WoW: Cataclysm at native resolution, bringing in 26fps. Of course, that wasn't the case when we fired up Batman: Arkham Asylum. We had to take the resolution down a few notches to 800 x 600 to hit a solid 30fps, but that wasn't exactly astonishing. So the CR650 probably won't be any serious gamer's laptop of choice, but it suited our needs just fine.

If you ask MSI, one of the CR650's big selling points is battery life; the machine comes equipped with a dedicated button for selecting different energy modes via its proprietary Eco Engine power management system. The special setup lets you switch between gaming, movie, presentation, and office mode, but as is evidenced by the chart above, it's not exactly energy efficient when set to default. We suspected that it would fall behind the 11.6-inch Fusion netbooks, but were frankly astonished by the separation. This 15-incher only stayed juiced for three hours and ten minutes -- that's a difference of almost two hours when compared to the HP Pavilion dm1z and Lenovo ThinkPad X120e. Despite it's claims of efficiency, the CR650 only managed to run 35 minutes longer than its weakest competitor, Gateway's NV5933u. So it didn't live up to MSI's battery claims, but this big boy is nice and cool -- an attribute that can be credited to the side-facing vent. We spent a week with the thing, and never once suspected our future babies were in danger.

The CR650 comes with a pretty hefty array of software loaded on the Windows 7 Home Premium (64-bit) desktop. Alongside the ever-present Norton fare are a series of Magix media programs -- including Photo Manager, Video Easy, and Music Maker -- Nuance PDF Reader, and a handful of MSI-branded titles. Both the preloaded facial recognition program, EasyFace, and EasyViewer, a simple photo organizing and light editing tool, failed to live up to their names. EasyViewer was slow to load and even slower to perform any real tasks, and while we like the idea of logging on to our computer with a little face time, EasyFace isn't big on subtle changes. It failed to recognize our striking good looks when we ditched the glasses and parted our hair in the opposite direction. In fact, we found that even slight variations in lighting could throw the thing off. In the end, we ditched the facial recognition, opting for the standard password login instead. MSI's CameraRecorder was similarly disappointing, as the 720p camera produced grainy video with muddy colors.

The company did get one thing right in the software department, though, with the rather simple and useful S-Bar utility manager. The little blue star at the top of the screen acts as a more graphically driven Start Menu, with shortcuts to utility controls like the aforementioned Eco Engine and access to a handful of programs like EasyFace. For the most part, we avoided the little stellar icon, but more out of habit than indifference.

As it turns out, size does matter -- at least in the case of the CR650. We were excited to see what a Fusion packing 15.6-inch system could muster, but ultimately found its performance puny by comparison. We're not entirely ready to write this one off, however, because despite a bulky body and occasionally clunky performance, MSI's latest laptop is light on the wallet. It's also a powerful player in the sound department, and follows through on its promise of superior graphics. If you're in the market for a low cost notebook that can play video like a pricier PC, then the $500 CR650 is probably a safe bet, but if it's a big machine that delivers big results you're looking for, then it might behoove you to hold out until Llano lands.