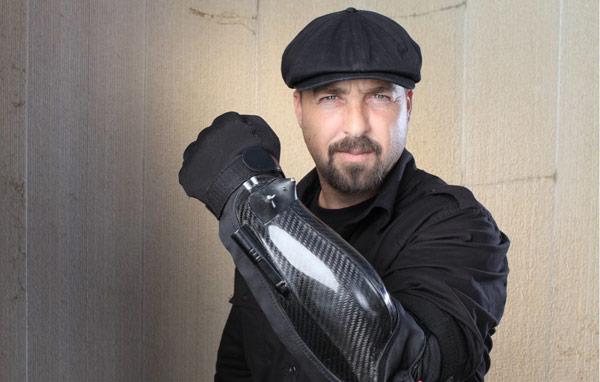 What's better than a seasoned crime fighter? How about a seasoned crime fighter packing a 300,000-volt punch? A new prototype stun-glove is poised to make such Robocop-inspired dreams a reality, integrating a non-lethal taser, LED flashlight, and laser guided video camera into a fetching piece of futuristic armor. Activated by pulling out a grenade-like pin and palming an embedded finger pad, the Armstar BodyGuard 9XI-HD01 sparks a loud and visible arc of electricity between its wrist-mounted taser spikes, a sight that inventor David Brown hopes will encourage would-be crooks to surrender. The gauntlet's hard plastic shell is even roomy enough to add GPS equipment, biometrics, chemical sensors, or other embedded additions, as needed. The first batch of pre-production superhero gloves will hit the streets of LA later this year for testing and evaluation. Need more? Check out the via to see Kevin Costner (what field of dreams did he walk out of?) take the edge off this shocker in a surprisingly dull video.
In this article: 720p, 9xi-hd01, arms control, Armstar, Armstar Bodyguard, Armstar BodyGuard 9xi-hd01, ArmstarBodyguard, ArmstarBodyguard9xi-hd01, BodyGuard, BodyGuard 9xi-hd01, Bodyguard9xi-hd01, camera, cops, crime fighting, CrimeFighting, criminal, criminals, flashlight, flashlights, glove, gun, LA, LA Sherrifs Department, LaSherrifsDepartment, law enforcement, law enforcement camera, law enforcement equipment, LawEnforcement, LawEnforcementCamera, LawEnforcementEquipment, Los Angeles, LosAngeles, police, robocop, security, stun, stun gun, StunGun, taser, tasers, wargadget
All products recommended by Engadget are selected by our editorial team, independent of our parent company. Some of our stories include affiliate links. If you buy something through one of these links, we may earn an affiliate commission.
Share
Tweet
Share