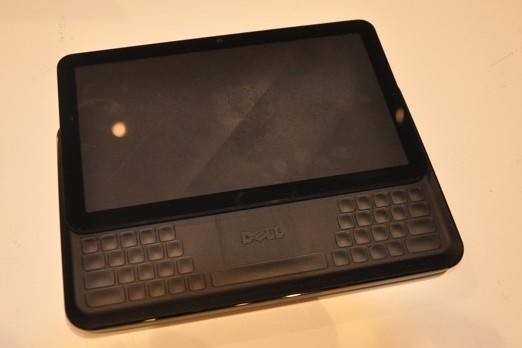 Whoa. Every so often, a giant in Round Rock pokes it head up above water long enough to put forth a truly mesmerizing design, and while it's no Adamo, this is most definitely the freshest take we've seen on tablets in a very, very long time. The gallery below showcases a prototype that's lounging around within Dell's top secret labs, a 7-inch slate that's adorned with a slide-out keyboard. Said keyboard, however, is hardly typical -- it's rocking a split-key design that's not at all dissimilar to the virtual layouts recently showcased within iOS 5 and Windows 8. So far as we can tell, the entire alphabet's present and accounted for, and there's a rear camera that'll be more than happy to make your child's next birthday party a bit more awkward. Outside of that, we've no other details to pore over, but it's safe to say that we'll be doing our darnedest to change that. Oh, and if you're doubting that this thing has a future as a real-deal product, there's a shot just south of these very words showcasing what looks to be a commercial / press render. Delicious.

Update: So it turns out that these photos were actually taken by Tweakers, who met up with the crew from Dell's Austin Design Center to gaze upon this prototype tablet earlier this week. Tweakers says that the concept is about three to four years old, and it eventually led to the development of the eccentric Inspiron Duo. Unsurprisingly, Dell also confirmed to us that this device will never make it to the market; but of course, there's still the Streak 10 Pro Android tablet to look forward to.
In this article: 7-inch, Austin Design Center, AustinDesignCenter, concept, Dell, Dell Austin Design Center, dell tablet, DellAustinDesignCenter, DellTablet, Design Center, DesignCenter, slate, split key, split-key, SplitKey, tablet, tablet pc, TabletPc
All products recommended by Engadget are selected by our editorial team, independent of our parent company. Some of our stories include affiliate links. If you buy something through one of these links, we may earn an affiliate commission.
Share
Tweet
Share