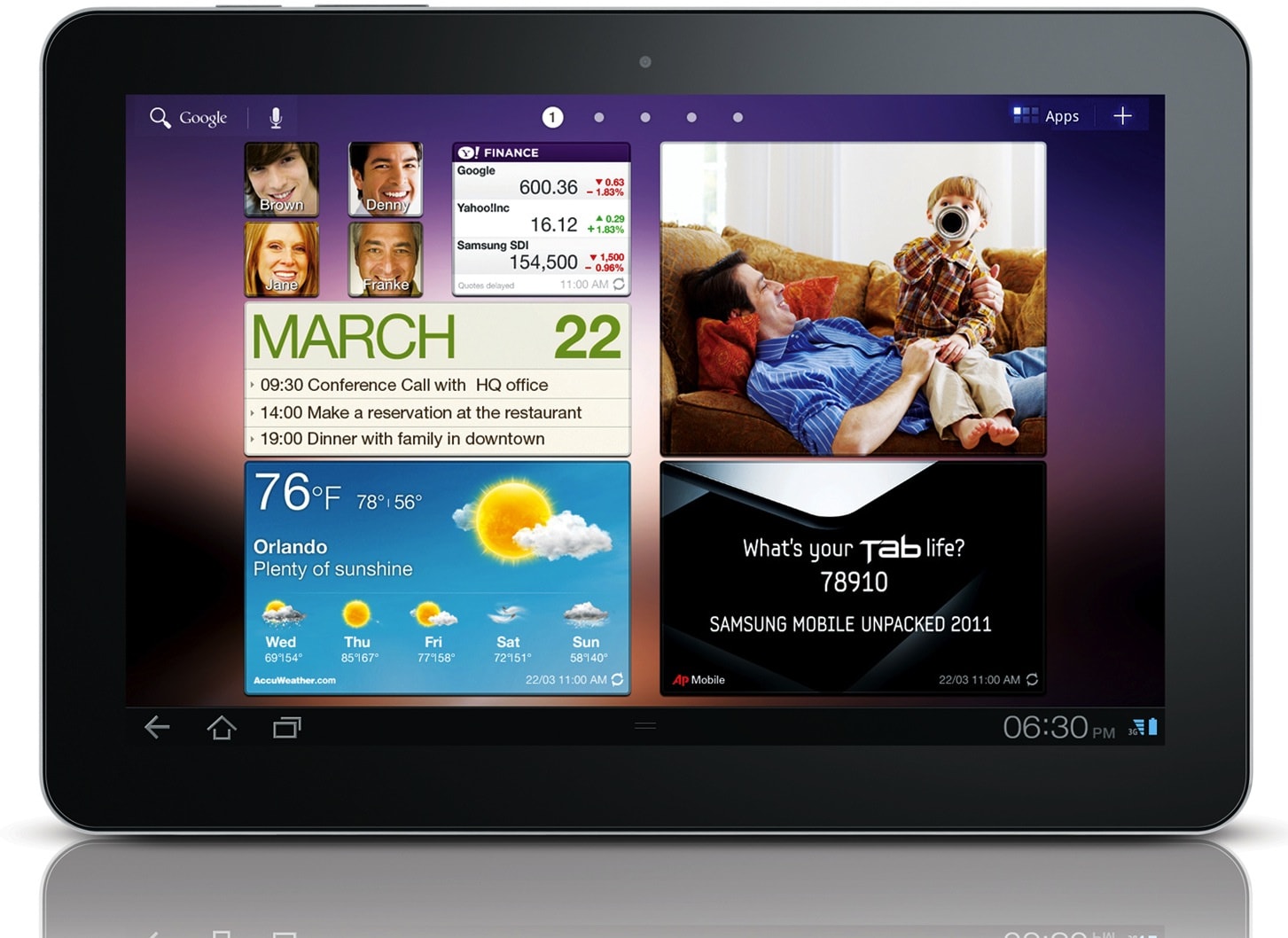 When we met with Samsung in late May, company representatives didn't seem entirely sure that the company would meet the rumored June 8th ship date here in the US, but lo and behold, it's done just that. The tablet's launching at noon today at the Best Buy in New York City's Union Square, and if you can't make it up to the Big Apple, it'll hit the rest of the nation on June 17th. But here's the real question: is it worth making an effort to snag it on either date? The Galaxy Tab 10.1, much like its Limited Edition sibling that we reviewed last month, is ever-so-slightly thinner than the iPad 2, a slate that most sane individuals (and competitors, for that matter) would confess is the market leader today.

Naturally, everyone and their sister is gunning for Apple in this space, and Honeycomb's the first mobile OS we've seen that has the potential to put any sort of damper on Cupertino's ongoing rave. By and large, the consumer version of the Tab 10.1 is the same as the device launched at Google I/O, but there's two key differences that we'll focus on here: the tamed design, and the thoroughly different OS version (v3.1 here versus v3.0 before). Head on past the break for an in-depth look into both of those, but be sure to first take a gander at our Limited Edition review to wrap your noodle around the basics. Slimmer than the iPad, it's far and away the nicest Honeycomb tablet to date, and one Android fans shouldn't overlook.

How would you rate the Galaxy Tab 10.1?
We want to hear what you think. Post a quick review now to join the conversation!
Write a review

You're going to hear this a lot throughout the review, but every opinion we drew from using the Tab 10.1 Limited Edition applies here. Every. single. one. Why? The consumer model is is a spitting image of the LE variant, save for the motif on the rear; the one you'll pick up this month has a glossy white plastic rear, while the LE model had a glossy white plastic rear... with an Android army adorning it. Weight's the same, size is the same, build quality is the same. It's a tremendous thing to hold, and it truly oozes quality from corner to corner.

Outside of the color scheme on the rear, nothing is different this go 'round. We promise.

While the internals remain the same here as on the Limited Edition build (1GHz Tegra 2, 1280 x 800 resolution display, front- and rear-facing cameras), something's changed with Android 3.1. Google claimed that the newest build of Honeycomb would perform even faster than 3.0, and in practice, things did seem to operate at a subtly brisker pace. Animations were a pinch quicker, and transitions were ever-so-slightly faster. Web browser performance was noticeably better, although we did see a few videos load up in a smaller window while the same video expanded out to fill the screen within Android 3.0.

But that said, we're having a difficult time aligning our real-world experience and our benchmarks. The Tab 10.1 Limited Edition (which shipped with an admittedly wonky version of Android 3.0) managed to hit an average of 1,970 within Quadrant benchmark -- a standard benching tool that was also used in our G-Slate and Xoom review. You'd expect the streamlined Android 3.1 sibling to perform better, but alas, that wasn't at all the case. After running the same test five times on the Tab 10.1, we hit an average score of 1,540. The highest we saw was 1,546. That's off of a fresh reboot with nothing spinning in the background aside from the occasional widget update. It's as baffling to us as it likely is to you; we're guessing that Quadrant just reacts dramatically different to v3.1 than v3.0, and we're obviously eager to see if future Android 3.1 slates score lower across the board than the 3.0 devices that came before.

When we sat down to our video loop test, with WiFi on and display brightness at about 65 percent, we scored just under ten hours (again!). That's second only to the iPad 2, and by merely half an hour. Jack that brightness down a bit, and you could probably squeeze 11 hours out. The upside is that Android 3.1 doesn't seem to have a negative impact on battery life; the downside is that Android 3.1 doesn't seem to be any more power efficient than Android 3.0.

As for audio and video playback? It's what you'd expect; Music Beta streamed our cloud library sans issue over a home WiFi network, and the audio output is on par with every iDevice you've ever tested. It's not quite up there with Cowon or anything, but then again, neither is anything else in this field. Flash, DivX, MPEG4 and H.264 files all played back exceptionally well. Even 720p content seemed to cause no strain whatsoever on the system, though we'd still probably recommend transcoding any of those files you've got sitting around in esoteric containers. Again, this isn't a Cowon, so it ain't going to support everything you throw at it.

At long last, the primary differentiator between the Tab 10.1 LE and the far-less-limited Tab 10.1: 0.1. Android 3.1 brings along widgets that can be resized vertically and horizontally, access to the newfangled Movies section of the Android Market, improved overall performance and support for a host of USB accessories. Unfortunately, the Movies department is only open for Android 3.1 tablets with 3G radios, hence, our 16GB WiFi test unit still showed it as unavailable. That said, we've already tested that particular aspect with a Motorola Xoom, which can be seen here.

The performance improvements, however, are here. They're subtle, sure, but you won't find us kvetching about extra speed, regardless of how minor it is. Granted, we didn't have any real qualms with performance on the Tab 10.1 Limited Edition, but it's safe to say we've even fewer qualms here. Resizing widgets worked, and worked well, but it's mildly annoying that it only supports a smattering of 'em right now -- we're hoping to see more apps updated soon to take advantage, and when that happens, homepane tweakers will no doubt find these remarkably useful. It enables each pane to be full of useful, glanceable information -- a sizable calendar prevents you from having to load the app each time, for example.

Outside of that, the software's largely unchanged from where Honeycomb began. Those anticipating a significant overhaul will be sorely disappointed, but we're thrilled to say that Google's polished up an already excellent foundation. Unfortunately, the Android Market still isn't home to many tablet applications; Apple just announced at WWDC that the App Store is home to some 95,000 tablet programs. El Goog hasn't shared its numbers in this regard, but it doesn't take an awful lot of poking around to see that it's nowhere near. Honeycomb still has a lot to prove, and it's up to developers to prove it. For now, those looking for a wealth of options will have better luck wading through the App Store, but hopefully things will be drastically different as the year churns on.

We'd also like to point out a huge, huge issue with using the Galaxy Tab 10.1 in conjunction with OS X. For whatever reason, Android File Transfer still hasn't been updated to support this slate, which means that you cannot (easily) use your Mac to transfer files onto your device. We have to wonder what Google was thinking when it fundamentally changed how Macs could interface with Android; our Nexus One (Android 2.3) simply pops up as an external drive on the desktop of a MacBook Pro, while Honeycomb devices require a dedicated piece of software that may or may not work. Blech. We're hoping Google updates AFT in the hours ahead; otherwise, you can expect the forums to come alive as Mac owners struggle to make contact with the $500+ slate they just bit on.

No shocker here -- the 3MP rear camera on the Tab 10.1 impressed us just as much as the camera on the Tab 10.1 Limited Edition. We still aren't sold on using a slate to take photos, and we still aren't overly impressed with the image quality here. It's hard to knock something that most folks aren't going to take advantage of, though, so we'll just let the below sample shot gallery speak for itself. The conclusion we came to after using the Tab 10.1 Limited Edition mimics the conclusion we've drawn here: this is the best Honeycomb tablet to date, and lucky for you, this one's available to purchase! Only time will tell if the Android Market will prove to be as well-stocked as the App Store, and if you're willing to wait, this here slate provides a world-class Gmail experience, better handling than the iPad 2 (in our humble opinion, anyway) and a higher resolution display.

The 16GB WiFi model will hit for $499 -- exactly in line with the iPad -- while the 32GB variant will demand $100 more (we're still awaiting word on 3G prices). If you're sold on Android, and you aren't too concerned with having an LTE radio in your tablet, there's really no need to look elsewhere. Of course, the impending release of iOS 5 makes it awfully hard to ignore just how good the iPad 2 will be this fall, but who's living in the future, right?

We'd still prefer Music Beta to be more more like iTunes in the Cloud, and we'd love a microSD slot, but we can't help but applaud Samsung for pushing Android tablets to a level they've never reached prior to now.
In this article: android 3.1, android tablet, Android3.1, AndroidTablet, galaxy tab, Galaxy Tab 10.1, GalaxyTab, GalaxyTab10.1, google, honeycomb, review, Samsung, Samsung Galaxy Tab 10.1, SamsungGalaxyTab10.1, slate, tab, tablet, tablet pc, TabletPc, video
All products recommended by Engadget are selected by our editorial team, independent of our parent company. Some of our stories include affiliate links. If you buy something through one of these links, we may earn an affiliate commission.
Share
Tweet
Share