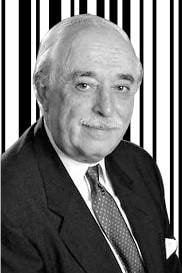 A man whose impact on the world is nearly unfathomable died Sunday. Alan L. Haberman, supermarket-executive-turned-barcode-champion, died in Newton Massachusetts from complications of heart and lung disease at the age of 81. While he did not invent those ubiquitous black and white stripes -- that honor belongs to Norman Joseph Woodland and Bernard Silver -- Haberman did lead the campaign to make barcodes the universal standard for electronic product encoding. He chaired the committee responsible for the designation of the zebra-like markings, which in 1973 adopted a barcode designed by George J. Laurer of IBM. In his work at the Uniform Code Council (now known as GS1 US), he pushed for acceptance of multiple standards, including RFID. His obituary can be read in-full at the source link below.

In this article: Alan Haberman, AlanHaberman, bar code, BarCode, dead, died, GS1, Haberman, obit, obituary, RFID, Uniform Code Council, UniformCodeCouncil
All products recommended by Engadget are selected by our editorial team, independent of our parent company. Some of our stories include affiliate links. If you buy something through one of these links, we may earn an affiliate commission.
Share
Tweet
Share