D. Murph
June 26th, 2011
In this article: audio, c2, cowon, cowon c2, CowonC2, flash, handheld, media player, MediaPlayer, mp3, mp3 player, Mp3Player, music, pmp, portable media player, PortableMediaPlayer, review, video
And here you were assuming the tried-and-true PMP was dead. Au contraire. Cowon's not giving up on its dream quite yet, but after the D2 hung around at the company's low-end for the better part of four years, it's an alphabetic step backwards that's taking over as the successor. The diminutive C2 is about as simple as a PMP gets -- design wise, anyway -- but it's actually capable of supporting both music and video on its 2.6-inch resistive touchpanel. And then there's the purported 55 hours of battery life, included microSD card for expansion and the company's world-class audio quality. Still, $135 goes a long (long!) way in the portable music industry these days -- does the C2 pack enough punch to make your short list? Head on past the break to find out.
%Gallery-127150%
Cowon
0
SCORE
Engadget
N/A
Critics - Not yet scored
N/A
Users - Not yet scored
N/A 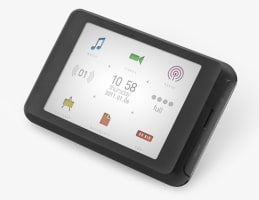 Cowon's still grasping for mind share in the North American market, but if it keeps pumping out pieces crafted like the C2, it'll be well on its way to achieving just that in no time. We've generally found ourselves quite pleased with the overall construction of Cowon devices, and this bantam player is no different. The 16GB C2 is built like devices demanding twice its MSRP, with a rock-solid chrome rear and a plastic front casing that's as rigid as they come. It's also absurdly small and light; if the Veer 4G were a PMP, it'd be this guy.

Walking around the edges, there's a power / sleep button, inbuilt mic, Menu (read: Home) button and volume up / down switches on the top. There's nary an indention on the bottom lip, while the right is home to a covered USB / AV port and a microSD slot. The left side is where the 3.5mm headphone jack resides. There's a far more visual description in the video below.


The 2.6-inch resistive touchscreen is about as responsive as they come... for a resistive touchscreen. We'll confess to being downright spoiled by the glut of capacitive panels that we've been whisking our digits across, but to be fair, we only had to "redo" swipes every so often, and if you're a playlist kind of guy / gal, you'll probably set-it-and-forget-it. Overall, the screen is decidedly average, but it's important to note that we never reached the point of annoyance while using it. Visually, it's not exactly the crispest thing we've seen, but we wouldn't expect much more from a 320 x 240 screen resolution. Viewing angles made it abundantly clear that this thing was meant to be viewed by one soul at a time, but we have to say -- video playback was both smooth and enjoyable. Not bad at all for a unit of this stature.

The homebrewed software on the C2 is eerily similar to that found on the V5, X7 and D3 Plenue that came before it. It's dashing, refreshing and -- for the most part -- simple to navigate. The actual design is almost whimsical, and while the familiar "grid of icons" is most certainly present and accounted for, the pastel hues just make it altogether easier to cuddle up with. We also love that Cowon threw a Menu button along the top; it's the equivalent to the Home button on the iPad and iPhone, and regardless of where you've ended up in the menu system, a single press will boot you back out to the front and rescue you from imminent frustration. Kudos on that one.

Strangely enough, the inclusion of that button makes us yearn for an easier way to jump into our music. It's not that difficult, but given that the primary function here is to operate as a music player that'll spin jams for over two straight days... well, we'd just love a double-push of that Menu button to hop into Music (or better still, be user-customizable). The graphical elements of the music function are gorgeous; it displays the track title, time, artist, volume and a spinning record of the album art whilst playing. A beautiful touch for a $135 device.

We've complained in the past that Cowon just makes it too difficult to get back to your overall list of artists and / or playlists, and while things are somewhat easier on the C2, it's still not exactly intuitive. While a song is playing, you have to press anywhere on the screen, hit the 'Open' button (looks like Eject), tap a speech bubble (?) in the top-right corner, then press a strange upward arrow along the newfound bottom row of icons. A pretty wild ride to run through every single time, if you catch our drift.

Outside of that nitpick, we found complaining to be hard work here. The UI elements truly are eye-pleasing, and with a few exceptions due to to touchscreen wonkiness, we found performance to be well above par. Of course, we'd highly recommend a Class 6 or Class 10 microSD card if you're planning on adding an extra 32GB to the 16GB of internal storage, but even then, those with patience should have no issues once the folders load up. Below, you'll find a full-on UI walkthrough video.

We'd typically make some kind of joke about "things never changing," but we're far too relieved to do that. The absolutely unmatched aural quality found on the higher-end X7 and D3 Plenue is right at home here, even on a $135 PMP that's obviously marketed at folks who may not have $350+ earbuds to truly appreciate it. There's just no beating around the bush -- if audio quality is your primary concern, you should own a Cowon. The C2 carries on that legendary trait, with all manners of genres sounding their best. It's subtle improvements -- bass that's a bit punchier, highs that are a tad more defined, and mids that cut through instead of getting lost in the mix -- but it's improvements that self-proclaimed audiophiles will undoubtedly appreciate.

We tested the C2 with a variety of files, file formats and headphones, and this guy continued to sound better than our in-house Nexus One, iPod touch and iPhone 4. It's not like any of those alternatives sound "bad," but it's vital to remember that Cowon's product line specifically aims at those who are absolutely obsessed with sound quality. Frankly, it's hard to appreciate what the C2 offers unless you also appreciate that level of expectation.

At $135, Cowon's C2 is tough to beat. It's easily capable of besting anything else in this price range when it comes to audio quality, and the fact that it ships with 16GB of internal storage and a microSD expansion slot inches it closer to a world of its own. With a 32GB microSD card, you can have a pebble-sized PMP with 48GB of space and a battery that'll easily last 50+ hours. (We hit 48 hours on an audio loop, but we toyed with it off and on throughout those two days, leaving the screen lit for fairly large chunks of time.) Toss in a nearly-endless list of supported music and video formats, a 2.6-inch display that actually can handle full-motion when asked, and a laudatory build quality, and you've got a specialized device that's hard to ignore.

Make no mistake -- the C2 isn't for everyone. You need to want a dead-simple multimedia player with top-notch battery life and unbeatable aural virtues. Those looking for Angry Birds and built-in Bluetooth aren't even in Cowon's target market, and frankly, you'll be paying more for those luxuries if you head elsewhere. A 16GB iPod nano demands $179, offers a far less enticing display (for video playback, anyway) and will peter out in just 24 hours -- meanwhile, the C2 could keep going for at least another day beyond that. The biggest problem with this fella? It'll do a darn good job of making you want a set of these.
All products recommended by Engadget are selected by our editorial team, independent of our parent company. Some of our stories include affiliate links. If you buy something through one of these links, we may earn an affiliate commission.