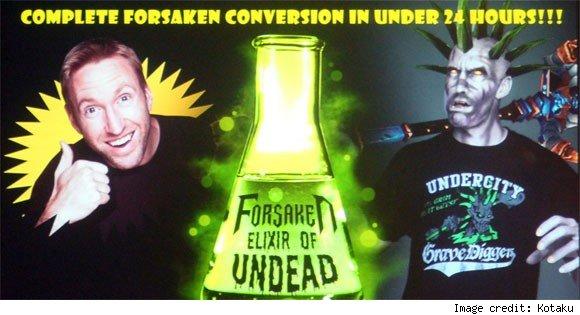 StarCraft's line is expanding with new shirts, a first look at the MegaBloks Viking, a leather wallet, and StarCraft: Ghost: Spectres, which has been confirmed by Metzen to be a novelization of StarCraft: Ghost, the game that was and then never was.

Warcraft's wares continue along a familiar path with a slew of new T-shirts as well as what appears to be a beverage called the Forsaken Elixir of Undead ... I really have no idea, since it's most likely a joke slide. Metzen also previewed the covers for the forthcoming original graphic novels Horde and Alliance, coming out later this year.

[Thanks, Kotaku, for the tip and images.]
In this article: alliance, chris-metzen, Christmas, diamonds, graphic-novel, horde, mercedes-benz, metzen, san-diego-comic-con, sdcc, starcraft, starcraft-ghost, warcraft
All products recommended by Engadget are selected by our editorial team, independent of our parent company. Some of our stories include affiliate links. If you buy something through one of these links, we may earn an affiliate commission.
Share
Tweet
Share