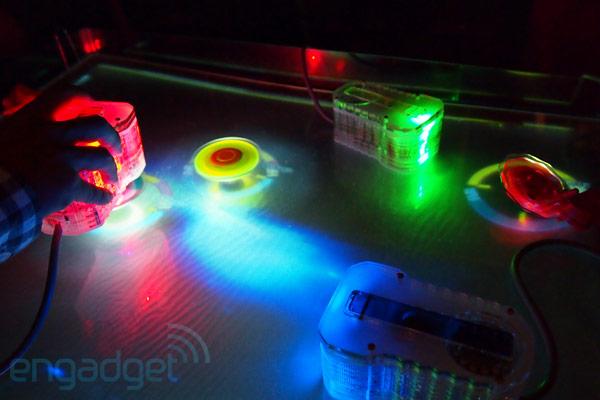 MoleTop a little too passive for you? Fret not, as a team from The University of Electro-Communications popped by this year's installment of SIGGRAPH in order to showcase something entirely more vicious. It's air hockey meets bumper cars, and the InteractiveTop demo was certainly one of the stranger ones we came across here in Vancouver. Put simply, it's a virtual game of spinning tops, where users use magnet-loaded controllers to shuffle tops across a board and into an opponent's top. There's an aural and haptic feedback mechanism to let you know when you've struck, and plenty of sensors loaded throughout to keep track of collisions, force and who's hitting who. Pore over the links below for more technobabble, or just head past the break for an in-action video.

In this article: concept, gaming, hands-on, interaction, InteractiveTop, project, prototype, research, SIGGRAPH, SIGGRAPH 2011, Siggraph2011, top, video
All products recommended by Engadget are selected by our editorial team, independent of our parent company. Some of our stories include affiliate links. If you buy something through one of these links, we may earn an affiliate commission.
Share
Tweet
Share