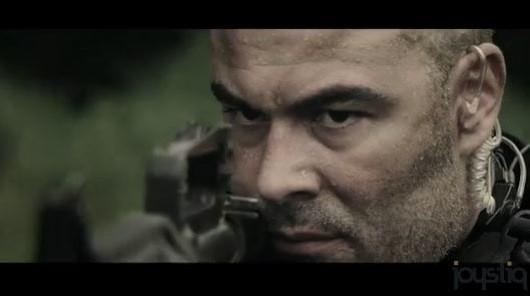 Among the festivities this weekend at Call of Duty XP in Los Angeles was the premiere of the second "Find Makarov" short film, subtitled "Operation Kingfish." In case you missed it on the live stream, you can watch the short above -- it's a segment set in between Call of Duty 4 and Modern Warfare 2, featuring part of the origin story for soldiers Soap and Price.

The filmmakers from digital agency We Can Pretend and visual effects company The Junction sat down with me here at the convention to chat about how Find Makarov originally came about, how Activision contributed to this Operation Kingfish followup, and what's next for these creatives and the Call of Duty brand on film.

The original short started out as a personal project for Jeff Chan. "I was playing through Modern Warfare 2," he says, "and I'm a filmmaker and I really liked the game. I was like I've never really seen a film from a first person perspective. I was like, what if you made a film from a first-person perspective, and it wasn't as crappy as Doom?" He came up with a story and a script, and took it to his co-workers at We Can Pretend, a digital media agency in Toronto. They all happen to be Call of Duty fans as well, and agreed to work on the movie together. "We all decided to kind of make this project," says Chan. "We were like screw it, we'll invest into it, and we'll see what happens."

As the company assembled a crew and production team, Chan says the fact that it was Call of Duty-related actually helped a lot. "As soon as we actually told people that we wanted to make a Call of Duty movie, and as soon as I started approaching the crew and bringing everyone on board and bringing it together, it was obvious that people wanted to be a part of something like this. The production came together quickly, and then the guys at We Can Pretend decided that they should do something to attract some attention even before release. "We were like, we need to do something to generate some buzz," says Chan. "And that's when you guys got those dog tags."

We did indeed. Even Activision was confused by the tags, which appeared to be some sort of viral promotion for the actual brand, even as the producers of the film worried what the company might think. "I personally got the phone call when the website went up," says David Fradkin of We Can Pretend. "I was in the car talking on the phone in Toronto to Activision's legal department, and they wanted to know what we were up to. So yeah we were a little bit nervous going into it. We kind of thought we'd stir the nest a little bit but we had no idea it'd be as big as it would be."

Just the countdown on the website drew a huge number of hits -- over two million in the first 48 hours. "It crashed a cluster of servers on Media Temple," laughs Chan. Activision was fine with the project, obviously (since they're showing the sequel at an official convention for the franchise), but did the filmmakers ever worry that they were essentially borrowing Activision's brand for their own work? Is that right?

Activision agrees -- mostly. After the first film did so well, the filmmakers had an idea for a second project based on the Call of Duty series, and We Can Pretend called up Activision to propose it. "The first thing they said," says Fradkin, "is the script that we sent them, the original script, was way too close to the game. We can't do it, we're stepping on their toes. Then we kind of started about, 'Ok, these are the elements we can use, these are the elements we can't,' talking about it and making the script that you saw."

Operation Kingfish is another action-filled short, this time featuring the period between the first and second Modern Warfare, explaining how a few of the characters get where they are in the second game. And it works -- while Call of Duty fans might know a little better just what's happening in the story, even fans who don't follow the characters seem to enjoy the action. "If you're a fan, you know that Soap has a scar on his eye," says Chan. "And so we explained how he gets a scar on his eye. You know that Price ends up in the Gulag. But if you're not a fan, it still works." It's tough, in this form with this franchise, to tell a really character-driven story. But Chan says the team tried their best to keep it interesting no matter what. "Four or five minutes, you can't really connect with characters, especially when you're getting them to blow up shit and not talk to each other. Hopefully it's entertaining to people who know nothing about the game."

The filmmakers didn't share actual numbers for the budget (that was mostly provided by Activision), but they did say that the money didn't matter much anyway -- no company could make this movie the way they did. "Preproduction and production and visual effects all included, it was about two months, eight weeks," says The Junction's William Chang. "Visual FX alone, this is unheard of. Even with a fully established visual effects company like ILM, the biggest of the biggest, if you tell a company like that that there's going to be 109 visual effects shots and it has to be done in under four weeks, they'll laugh at you."

"I laughed at Jeff," he remembers, "when he said, 'You guys don't understand, you pretty much have to put VFX on every single one of these shots.' And I looked at Jack [another Junction artist] and was like this is not possible. But we did it."

So what's next for this team? At that pace, at least, it's hard to imagine them working on a much larger project with the same kind of investment. And Fradkin agrees that while fans have asked about a feature-length film, it would definitely still be tough to do. "The challenge as well for something like this, is how do you make the movie, and respect the talent, the fanbase, and stay true to the story. It's typical when things go to the feature film level that those things don't usually go through as easily because of all the people involved. I think I speak for Jeff and everyone else involved that if we did work on something much bigger, even going as far as saying that we'd want to work on the feature, it would be amazing if we could still respect that level of accuracy and the love of the game, and still be able to do it using our creative vision."

That said, Chan makes it clear that, "We love this franchise. With the right opportunity, we would love to be making content for it." Especially with venues like Activision's own Elite TV available with the new subscriber service, it's hard to imagine that there isn't a call (of duty) for more content like Find Makarov. And Fradkin agrees: "I would be lying if I said that I didn't think something else was going to come out of this. It's only the next logical step."
In this article: activision, call-of-duty, call-of-duty-xp, call-of-duty-xp-2011, filmmakers, find-makarov, Modern-Warfare-2, operation-kingfish, the-junction, vfx, we-can-pretend
All products recommended by Engadget are selected by our editorial team, independent of our parent company. Some of our stories include affiliate links. If you buy something through one of these links, we may earn an affiliate commission.
Share
Tweet
Share