This giant military spy blimp is really hard to miss 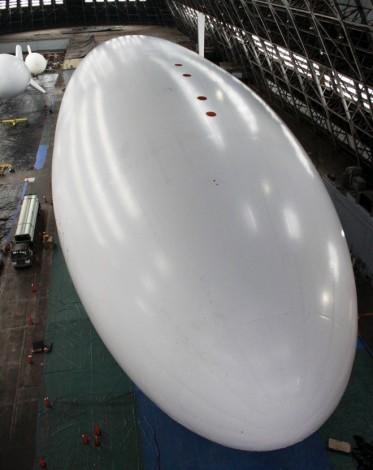 What's this spy blimp doing next to an 18-wheeler? We're not entirely sure, but it's certainly not being subtle about it. This jumbo-sized floater, codenamed "Blue Devil Block 2," measures some 370 feet in length and comprises a whopping 1.4 million cubic feet. Originally inflated in September, the definitely-not-blue Blue Devil took flight for the first time last week in North Carolina and, if all goes to plan, should head to Afghanistan by the middle of next year. The Air Force says the blimp will hover above the country for five days at a time, collecting surveillance data from 20,000 feet above the ground and transmitting its findings to US intelligence officers on the ground, via laser. When that's taken care of, it'll be used to make the biggest omelette ever.
In this article: 18-wheeler, afghanistan, Afghanistan war, AfghanistanWar, air force, AirForce, blimp, Blue Devil Block 2, BlueDevilBlock2, egg, enormous, espionage, giant, huge, intelligence, laser, military, minipost, spy, spy blimp, SpyBlimp, subtlety, surveillance, US Air Force, UsAirForce, war, war on terror, wargadget, WarOnTerror
All products recommended by Engadget are selected by our editorial team, independent of our parent company. Some of our stories include affiliate links. If you buy something through one of these links, we may earn an affiliate commission.
Share
Tweet
Share