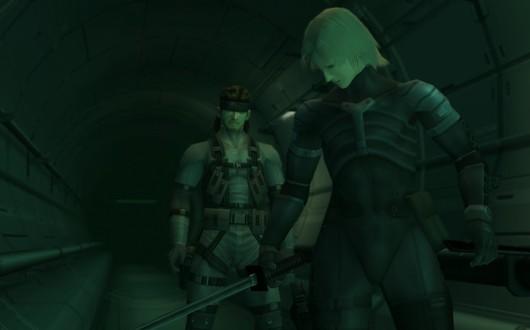 If you've never played a Metal Gear Solid game before, the slogan "tactical espionage action" probably doesn't evoke memories of baffling sci-fi plots, ludicrous boss fights and the occasional bit of fourth wall humor. For the rest of us, Metal Gear Solid stands as one of the strangest and most iconic franchises of the last generation.

The Metal Gear Solid HD Collection wrangles together updated versions of Sons of Liberty and Snake Eater for the first time in high definition. Also included is a console version of the Playstation Portable title, Peace Walker. Add to that the original MSX2 versions of Metal Gear and Metal Gear 2, all for ten dollars less than the price of a standard console game, and you've got a collection approaching Orange Box levels of value.

And while what's included in this anthology is quite impressive, it's the elements that are missing in action that tend to stick out.

What's new this time around? For better or worse, very little has changed since Raiden and the Snakes' previous deployments. As the name implies, each of the games has received a bit of high-definition, sixty-frames-per-second spit and polish. Each game included on the disc was once a graphical powerhouse for its console and era. Now, with the enriched resolution and slick frame rate, the games not only look better than ever but hold up pretty well under modern scrutiny, the boss fights in particular. Only the collection's muddy textures serve to remind you that these games were never meant to be seen in the light of 1080p.

The jump to modern consoles also means modern online connectivity. Peace Walker's cooperative elements can now be enjoyed fully by those gamers who don't just happen to have three friends with PSPs. And it's a good thing too, since some of the later boss fights feel very much like they were designed to require players to have a social life. Of course, if you really miss being able to play your portable game on a portable, Konami's 'Transfarring' procedure has you covered. The process of moving your saves from console to handheld and back again is pretty painless, and is probably the most interesting addition in the collection -- provided you're playing it on PS3, of course.

How's it hold up? There is still no series quite like Metal Gear Solid.

Each game in the franchise (and in turn, this collection) manages to strike a perfect balance in spite of the volume of elements at play. At times both funny and somber and serious and goofy, action-packed and overly verbose; Metal Gear Solid is without question one of the most unique experiences to be had. The boss fights are still some of the most memorable in video game history and series creator Hideo Kojima's oddball sense of humor permeates even the most serious moments. There's a reason Metal Gear Solid has infiltrated the hearts of so many gamers.

The "tactical espionage action" formula still holds up very well; partially because so few games use stealth effectively. However, the control schemes and tactical options available in Snake Eater and even more so in Sons of Liberty have begun to show their age. Even when compared to Peace Walker -- which feels much more like a thoroughly modern shooter with simple tweaks, like over-the-shoulder gunplay and walking while crouched -- the older two show their age. Swapping between Peace Walker and the other inclusions can feel a bit like gaming jet-lag; everything just feels a little off and more difficult than it should.

Another artifact of the olden days that should have been pulled out of service is that there is still no way to pause cutscenes. In case you didn't know, Metal Gear Solid has some very (very) long cinematics. Metal Gear Solid 4 and Peace Walker addressed this issue by adding the ability to pause and skip the scenes at will. It seems a minor annoyance only up until your phone rings, at which point you face quite a dilemma.

The final and most glaring major omission from the game is the lack of the very first Metal Gear Solid in any form; an omission so devious it had to be perpetrated by the La-Li-Lu-Le-Lo. Including an upscaled version of the game that started it all would look slightly out of place, which is why The Twin Snakes, a GameCube remake of the first title, would have made for an acceptable substitute. If only it weren't published by Nintendo, likely preventing its porting to 360 and PS3.

As it stands, there is a pretty severe narrative gap left in this collection that will no doubt leave new players confused. If you can imagine watching the first couple of Star Wars prequels and then skipping straight ahead to The Empire Strikes Back, you've got a pretty good idea of what it would be like.

Even considering that omission, Metal Gear Solid still stands as a fantastic franchise worthy of everyone's attention. Each of the games included in Metal Gear Solid HD Collection are the definitive versions, even if they are just barely definitive.

In this article: hideo-kojima, kojima, konami, metal-gear-solid-3-snake-eater, metal-gear-solid-hd-collection, metal-gear-solid-peace-walker, microsoft, playstation, ps3, xbox
All products recommended by Engadget are selected by our editorial team, independent of our parent company. Some of our stories include affiliate links. If you buy something through one of these links, we may earn an affiliate commission.
Share
Tweet
Share